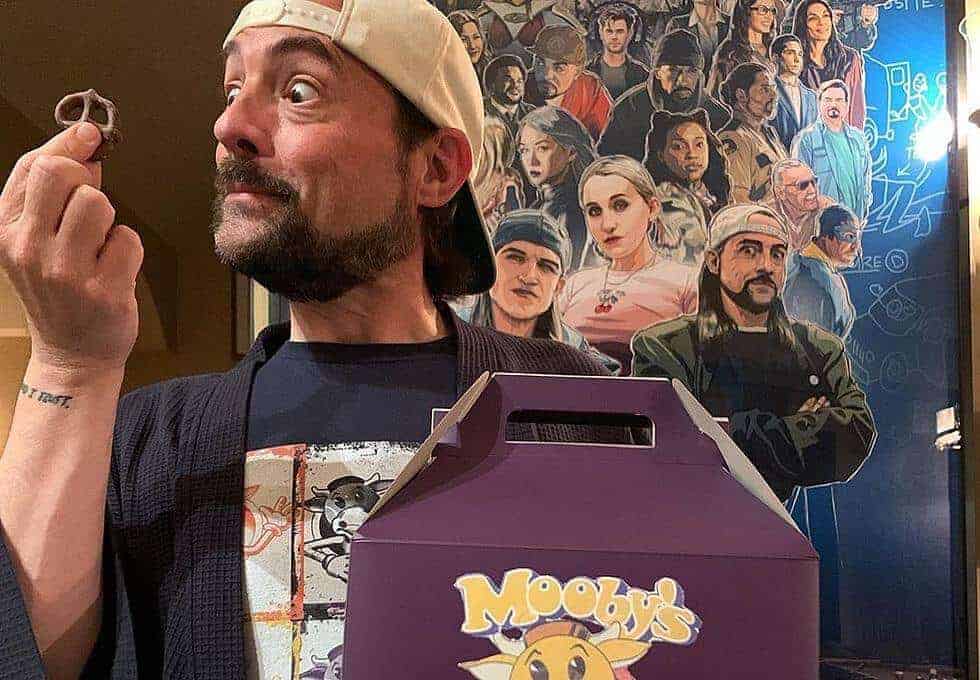 Film director Kevin Smith has relaunched Mooby’s, the fundraising popup burger shack in West Hollywood featuring a vegan heavy menu including Beyond Burgers and Beyond Sausages. The popup sold so many sandwiches upon its launch in April that it crashed delivery service Postmates twice, according to Time Out.

Kevin Smith and his fictitious restaurant have featured in many popular films such as Clerks, Dogma, Mallrats and Jay and Silent Bob Strike Back. The distinctive purple, yellow and orange burger shack is now expected to remain as a “real life” restaurant until at least the end of this month. In April Mooby’s launched online for one week amid the COVID-19 lockdown where it sold out on the first day and even claims to have sold 112 Mooby Meals in the first 46 seconds, according to the Twitter account.

In line with pandemic restrictions, customers must order online and request a time slot for pickup, which ensures social distancing. At present customers can eat on the patio outside or take away. The Moo Main menu includes options such as a vegan Cow Tipper (made with Beyond Meat), a vegan Egg Mooby Muffin (made with Beyond Sausage) or a vegan Lasagna Sandwich, which fans will recognise from the films.

Proceeds in April went to the charity – No Us Without You, which provides food for families of undocumented restaurant workers affected by the COVID-19 pandemic. Time Out reports that a new merch store (which includes face masks) will donate 100 % of the proceeds from the new “Mooby’s social distancing” shirts and 100 % of the restaurant’s first week of sales, to benefit a new neighbourhood initiative to clean up South L.A.

The popup isn’t exclusively vegan but is vegan heavy. Kevin Smith himself has focused on veganism following health scares in 2018, encouraged by his daughter who has been vegan since 2014.