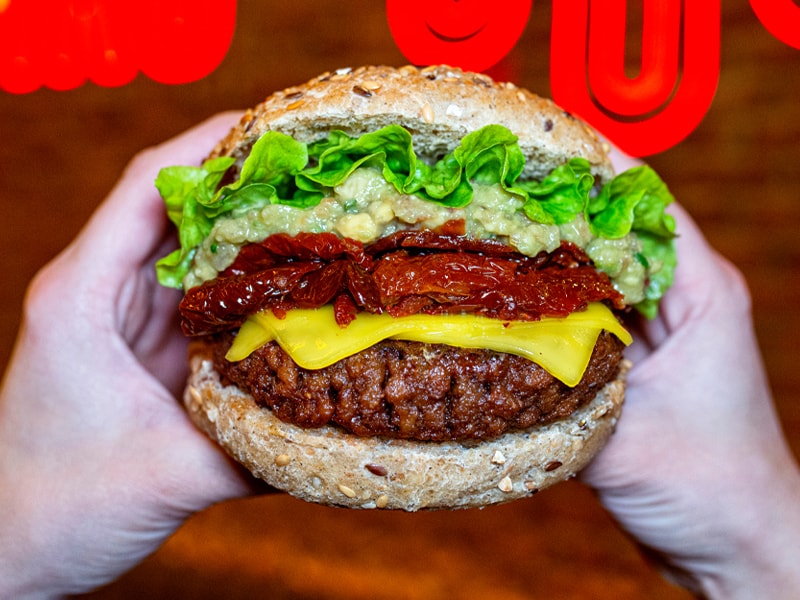 Edit 7th March: these burgers can be made vegan if ordered without mayonnaise.

Goiko, one of Spain’s largest burger chains, has launched three new vegan burger options on its menus featuring Beyond Meat and Violife. Goiko’s new plant-based menu offerings also include a new starter and a salad, as alt meat continues to grow in popularity across the country.

As well as two restaurants in Paris, France, Goiko has over 80 locations across Spain, making it one of the country’s most popular premium burger restaurants which has until now been almost exclusively focused on animal products. The new vegan creations include the Edamami – a veggie burger made with edamame, broccoli, couscous and rice, the Pollotariana – a plant-based chicken burger with roasted peppers, and grilled onion, and La Greta – made with Beyond Meat. All of the burgers come with Violife cheese.

Goiko’s plant-based options also extend to new vegan starters and salads on the menu, with Hummus Sapiens, a duo of basil and chickpea, and the Sana-horia, a green salad with superfoods.

Spain has seen an explosion in vegan eating, with more than 5 million people now following a vegetarian or vegan diet in the country – approximately 13% of the population. According to the data, from 2017 to 2021 people following a no-meat diet increased by 34% while sales of alt meat in Spain surpassed €86.5 million in 2020. Following the success of its plant-based offerings in the country, 2021 saw Burger King Spain also trial its first totally plant-based restaurant in Madrid.