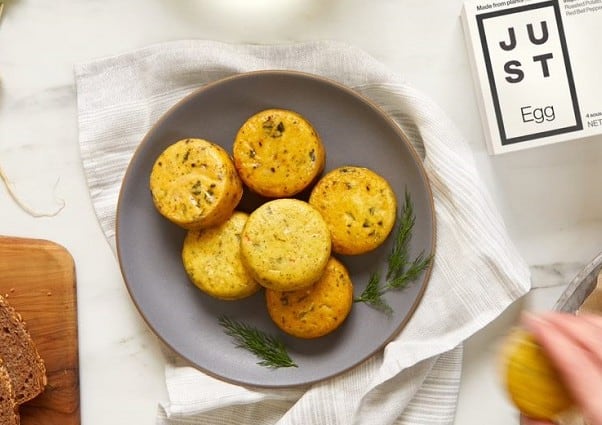 The limited-time menu is currently available at three Starbucks stores in the DC Metro area and includes:

“Starbucks continues to transform the way we drive innovation for the future of the company,” said a Starbucks spokesperson. “One of the ways we do this is by focusing on elevating the Starbucks Experience through testing and expanding our food menu.”

This is not the first time Starbucks has experimented with JUST Egg – in 2020, the chain reportedly tested a Plant Powered Breakfast Sandwich featuring JUST Egg in one location outside Seattle, though it never expanded the trial.

If successful, the latest test could prove to be one of JUST Egg’s largest partnerships to date, just months after the brand revealed its mung bean-based eggs achieved price parity with chicken eggs. By collaborating with Daring, Starbucks is also offering its first-ever vegan chicken items in the US. In a recent interview, Daring founder and CEO Ross Mackay hinted that the startup was working with several national chains.

Starbucks has gradually increased its plant-based menu options over the past several years, most notably by introducing the Impossible Breakfast Sandwich in 2020, made with impossible sausage, and a vegan lunch box. According to a spokesperson, “Testing is a way of life at Starbucks, and we continue to introduce new drinks and food to menus globally while innovating across key platforms like espresso, cold brew, refreshment, food, and more.”