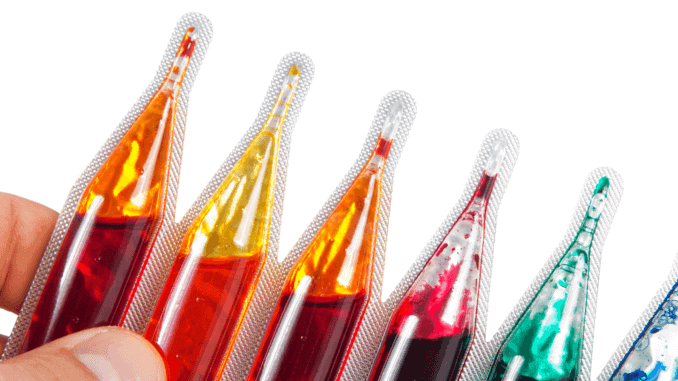 With the increasing demand for plant-based meat alternatives, the market for vegan food colourants is also on the rise, as certain manufacturers attempt to make meat substitutes more appealing and “realistic”. Below we discuss various types of dye from different manufacturers.

According to plant extract supplier Naturex, the market for plant-based meat alternatives is growing rapidly. And since colour is one of the most important factors for the attractiveness and appeal of meat substitutes, manufacturers are very interested in vegan dye alternatives.

According to Nathalie Pauleau, who is responsible for Naturex’s natural colouring department; carmine, obtained from the cochineal beetle, is the most commonly used colouring agent in the meat industry. However, since authentic carmine cannot be used in the production of plant-based meat substitutes due to the fact that it’s an animal derivitive; purely plant-based dyes such as beetroot or radish concentrates are an effective alternative.”In general, we believe that the use of colouring ingredients is the best way to increase the attractiveness of plant-based products,” says Pauleau. Plants provide excellent colour results which, according to the experts, could become permanently established as colouring agents in Europe. The British food manufacturer Moving Mountains, for example, uses beetroot juice as a colourant for its Bleeding B12 Burger.

However, there are also certain obstacles and difficulties when using these colourants for vegan products. For example, beetroot has probelms with heat stability when used as a dye. Furthermore, radishes can only be processed within the pH values of three to six. Pauleau mentions that lycopene – a dye from the carotenoid family – may also be suitable for such applications, due to its higher heat resistance. In order to create the appearance of roasted meat in substitute products, she recommends caramelised sugar, as the brown colour produced is  similar to that of the roasted crust of a piece of meat.

“These heat and pH problems mean that plant proteins are definitely not the easiest materials to work with,” Pauleau explains. She also points out that the use of colourants with more neutral primary colours makes it possible to start colour-creating from scratch, which is not the case with highly coloured products.

Naturex, recently acquired by the Swiss flavouring giant Givaudan, believes that the majority of the demand for plant protein ingredients comes from the US, closely followed by Europe, especially Germany and the UK.

Impossible Foods uses leghaemoglobin, a patented ingredient, for its famous vegan burger made of wheat, potatoes and soya. With the help of this substance, which is obtained from the roots of nitrogen-fixed plants such as soya, the meat substitute can be given a red colour very similar to that of meat.

When the cultured burger was first introduced to the public, the revolutionary in-vitro meat had to be pigmented with colourants, as it was previously a very unsightly grey colour. The end product was dyed with beetroot juice and saffron. Since then, Mosa Meat, the company created specifically to market the product, has been working on cultivating the ferrous molecule heme, which is intended to give in vitro meat the colour and taste of the original. The company recently announced, “We are 70 to 80 percent on target”.