Michael Mansfield QC: “I Have One, Singular Message – to Make Ecoside an International Crime”

Vegan charity Viva! launched its  Vegan Now campaign yesterday at the Labour Party Conference. The launch was fronted by Michael Mansfield QC, a leading barrister, who has been quoted in the popular press this week  including the Telegraph and the Independent, as saying that in future, eating meat could be made illegal, and should be banned like smoking in public.

The Vegan Now campaign stresses the connection between animal agriculture and environmental destruction, presenting veganism as the best solution to the climate crisis. The campaign launch brought together some of the most influential thought-leaders in environmentalism and veganism, including Michael Mansfield QC, Daniel Capurro (The Telegraph), Joseph Poore (Environmental Researcher, University of Oxford) and Kerry McCarthy MP, Labour MP for Bristol East.

Vegan Now hit international headlines, fronted by Michael Mansfield QC. Mansfield stated that new legislation is needed to criminalise the “wilful destruction of nature”, which he described as a “crime against humanity”. In a speech to be delivered via video link at the Labour Party Conference in Brighton, Mansfield stated:

“I think when we look at the damage eating meat is doing to the planet it is not preposterous to think that one day it will become illegal. There are plenty of things that were once commonplace that are now illegal such as smoking inside. We know that the top 3,000 companies in the world are responsible for more than £1.5tn worth of damage to the environment with meat and dairy production high on the list. We know that because the UN has told us so. It is time for a new law on ecocide to go alongside genocide and the other crimes against humanity.”

Speaking about Vegan Now, Juliet Gellatley Viva! founder and director said:  “Thirty years ago people didn’t bat an eyelid if you lit a cigarette in a pub or restaurant. But now society accepts smoking is harmful and totally unnecessary and so we legislated against it. The same could happen with eating meat.” 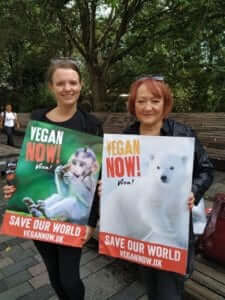 Dr Josh Cullimore called for meat and dairy to be removed from hospital menus, describing hospitals as “a place for healing and getting better, not eating animal products which make you sick.”

Dr. Cullimore went on to discuss the impact of meat and dairy consumption on the NHS, stating: “It has been suggested that if we all went vegan, 1.6 trillion dollars could be saved by 2050. With our struggling NHS this is vitally important.” MP Kerry McCarthy supported this statement, stating “In terms of public health, this will be the first generation to die of lifestyle illnesses as opposed to communicable diseases. There is a public health emergency.”