1561654852
Categories
Companies & Portraits Hot Off The Vegan Press
With the current outbreak of African Swine Fever described by experts as the worst outbreak in history, affecting China, Vietnam and now Thailand, the underlying pork supply will be highly unstable and the market is urgently looking for a sustainable alternative. Omnipork is a product created by Hong Kong’s Right Treat, founded by entrepreneur David Yeung with a vision to disrupt the industry with a plant-based alternative, and the current timing couldn’t be more fitting for its imminent expansion into China, as Omnipork tells vegconomist.
Pork is the most widely consumed meat in the world and is predominantly consumed in Asian countries such as China, where pork makes up 60% of the meat purchased in total. Chinese consumers ate more than 50% of the 79 million tons of pork consumed globally in 2018. One of the numerous drawbacks to this consumption is that an estimated 1.29 billion metric tonnes of waste is produced by the Chinese pork industry per year alone. A product like Omnipork would address these sustainability issues plus the unfathomable animal suffering caused by the pork industry worldwide.
Vegconomist received news as follows from Alvin Lee of Green Monday, the umbrella company of Omnipork’s manufacturer Right Treat, about their plans for immediate domination of the Asian market…

Vegconomist will keep you updated as to the pork revolution in the Asian market, where as we reported this March, consumers are more receptive to the idea of lab-based / cultured meat products. 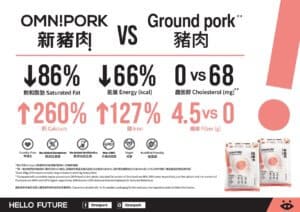