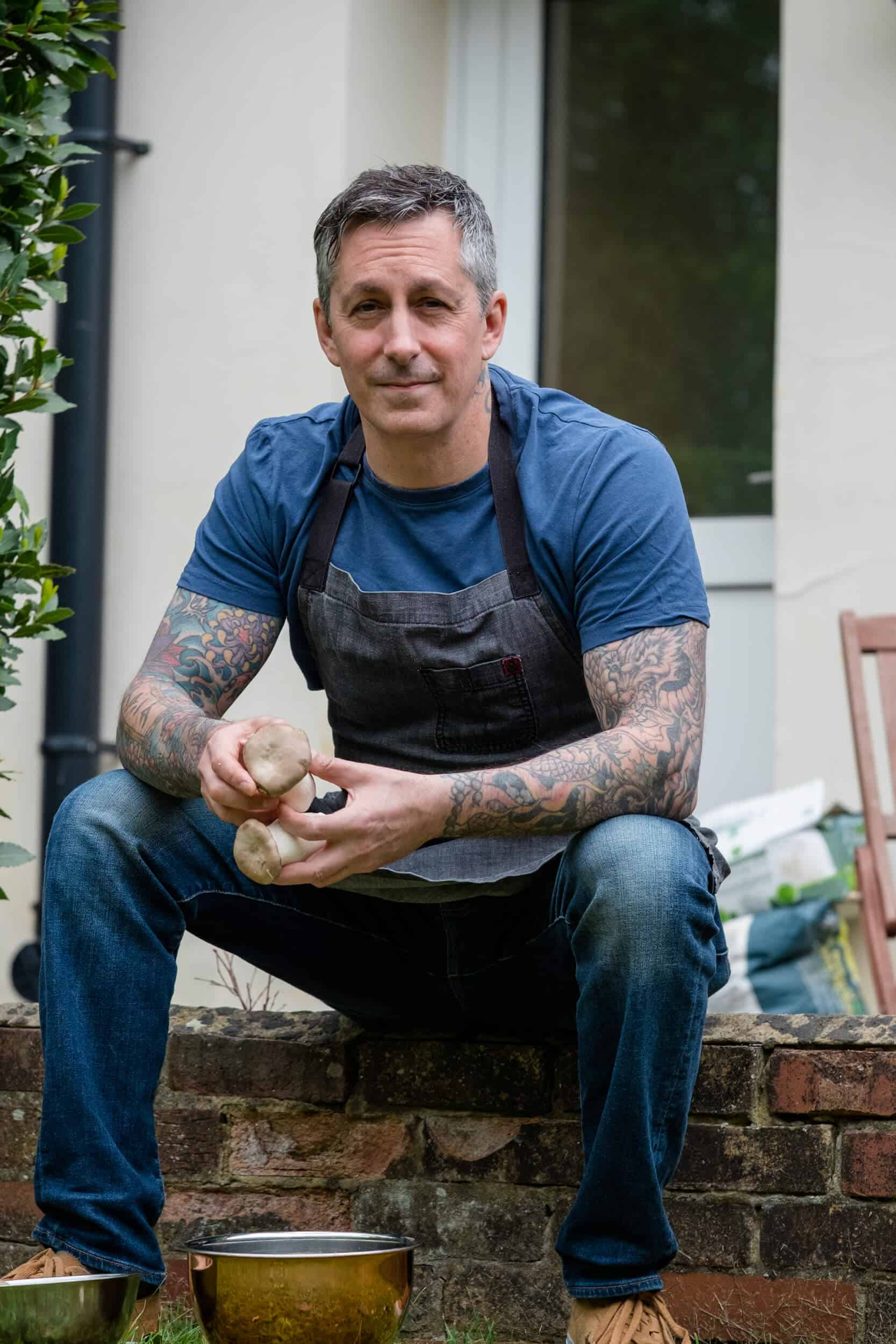 Derek Sarno is the recognisable vegan chef extraordinaire whose position as Director of Plant Based Innovation at Tesco saw the debut of his plantbased Wicked Kitchen line last year become the most successful product line ever launched in Tesco’s history. Yesterday, Wicked Kitchen announced the rollout of several innovative new products including vegan meats and ready meals to make plantbased both appealing and accessible to all.

The announcement also came with the supermarket revealing a new affordable plantbased line called Tesco Plant Chef, and the addition of dedicated vegetarian and vegan areas, as Tesco aims to be the category leader for vegan food in the UK.

Chef Derek kindly took time out of his busy schedule to speak to vegconomist about his work with Wicked Kitchen and the movement as a whole.

You launched with 20 products just 20 months ago -what is the current scope of the Wicked Kitchen portfolio, including the new additions? Which are you most excited about?

By the end of January (Veganuary 2020) we will be upwards of more than 80 Wicked Kitchen products and continue to work on more.  Adding to the excitement is the development of the new Tesco own brand, Plant Chef, launching alongside Wicked for the double plant pow!

You have said several times that you do not make food for vegans. Please can you expand upon this for our readers. Is your motivation to help convert meat-eaters to PB food by making it more appealing?
“We make vegan food for meat eaters,” has been one of our mottos and missions from the beginning.  We don’t need to make vegan food for vegans because we already know and find the foods available that are free from animals – which hasn’t been easy until now.  When I went vegan, I refused to eat boring foods or so-called twigs and berries and nothing was available to purchase from retailers.  This is why we developed our Wicked way of doing things and introduced Wicked Kitchen.

We lead with taste and crave-abilty; true innovation and a level of satisfaction that only comes from eating plants. Plant based is not boring, that’s a personality issue, and these misbeliefs shouldn’t creep into the foods we make and eat. More meat eaters choose Wicked Kitchen because it has the flavor and chef crafted amazement they’re looking for in food.

Your line is reportedly the most successful Tesco launch to date, selling out around the UK days after the debut and helping to raise Tesco’s share price – what sets it apart? Would you say that your food appeals more to male consumers than other brands?
Wicked Kitchen was first to market at the right time and place created to fill a white space very few saw coming.  My brother and I have years of experience working within retail and food and we’re able to watch and see where opportunities were headed, even if people didn’t believe us or listen at the time. We know how to cook plant based food and get it scaled and put that skill to good use.

What sets Wicked Kitchen apart is that we are chefs, we work with the food, we’re not sitting around a table trying to latch onto a trend. We want to create foods that offer a solution to the hellish animal based factory farmed foods ruining our planet. As far as whether or not we have more male or female customers I’d say we aim for men to try our food because we know the women are smarter – 80% of vegans are women, I saw that in a recent stat.

With Beyond Meat, Impossible Foods, Moving Mountains et al, the trend in PB for some time has been realistic meat-like plant protein products. Do you see this trend continuing and would you say this trend is noticeably beneficial for meat reduction in the general public?
It’s not a trend, this is a movement that will change the food system from the inside out. We’ve really not scratched the surface with what technology can do to support in creating plant based meats, so much is on the way. Any of these products, processed or not, that help people choose plant based over animal based is a better product in my eyes and that makes them all beneficial for the planet. I am all for meat alternatives and where the opportunity lies is bringing less processed, veg-centerplate to the mainstream in a creative, workable and wicked way and that’s what is coming next.

How did your time as Senior Global Executive Chef for Whole Foods Market influence your current success in the UK? Would you say that you have brought somewhat of an element of American enthusiasm into a conservative British market?
I loved my time at Whole Foods in the US. Got to work with my brother Chad, and for 6 years I traveled North America. Visiting suppliers, developing foods of all kinds for all occasions, worked with top doctors on what the best diet is for health and longevity (Plantbased Whole Foods Diet). Crafted, catered and led over 60 leadership events with all the exciting new foods that were coming to market. We had hands on insight into the plant based world we seeing rising today I’d say that was very valuable and we’re grateful for the experience.

I’d say I aspire to bring enthusiasm, tastes, passion and dedication to do something really beneficial for the British and ultimately global food scene. Things have to change and we hope we are a small part of that change for the better if we’re going to save our planet!

How many Wicked units are sold monthly through Tesco and are there any products which stand out as bestsellers?
We’ve sold over 10 million units in 20 Months – that is 10 millions meals free from animals!  I’d guesstimate more than 500K units sell a month with a current range total being roughly 30.  I anticipate more of an impact with the coming launch and expansion of the range and the addition of our new Plant Chef line.  Our best sellers are front of store sandwiches the Wicked Sweet Potato Pakora Wrap and the new Wicked Caesar Wrap followed by the amazing Wicked Italian Cold Cuts Sub.  Next would be the back of store ready meals with the Wicked Pizzas (all of them), Nana’s Bolognese and the Wicked Naked Burrito topping the best sellers list.

Can you say a little about the new initiative Wicked Meaty, helping chicken farmers to convert their farms into mushroom farms? Is the fungus the future of protein?
I’ve a passion for mushrooms!  And we have something brewing in the background, Wicked Meaty is the place holder name for now.  One of our missions is the idea of transitioning chicken farming into mushroom farming.  Having been in both mass production chicken grow houses (and slaughter houses) enough and also working closely with mushroom grower facilities, we see a lot of similarities and growing and eating mushrooms is much better for the environment and our health.  This is part of the future of food and offers the opportunity to create a closed loop production method that will be much more sustainable than the current.

We will be introducing some of the concept ideas into the Plant based Meat MOD this month. The Wicked Pulled King Oyster Mushrooms that emulate and can be substituted for any shredded or pulled meat item and the Wicked King Oyster Medallions that offer the texture of scallops, both of these innovations are bespoke to Wicked Kitchen.

We at vegconomist are also interested in Good Catch, the plantbased seafood company which you and your brother Chad are involved with.  How has this developed since the recent investment?  When can consumers try Good Catch tuna and in which markets?
Both brother Chad and I helped develop GoodCatch from the beginning, I ended up leaving and coming to work for Tesco. Chad continues leading GC as Head of Culinary.  It’s had a soft rollout in and is expanding into more stores throughout the states.  We just won another award at the last Expo East conference for best new product innovation.  The product is amazing and delivers in applications and taste!  It won’t be a surprise to know we’re working on bringing it to market in the U.K. Soon in food service and retail.  More on that coming soon…

What else could you add about the vegan market in the UK and otherwise, and how you see it developing in the next few years?
As vegans, we see the opportunities across stores and in restaurants clearly.  Wicked Kitchen is driving innovation within the U.K. and beyond, into homes and business, aimed to inspire people and chefs to cook and offer more plant based foods!   When that’s not possible we have delicious, easy, convenient meal solutions available and ready for purchase.

We encourage competition in fact, I challenge businesses to up their game and serve more vegan foods!  The world needs to change now, not tomorrow and the easiest way we can have impact is by being aware of the food choices we put in our bodies.  I’m not talking about the business guys jumping on the band wagon, we see right through that shit. People want to do the right thing and we want to support by providing plant based options where there have been none!  We want to empower people to make their own decisions with the proper information that impacts their health and the planet. The next few years I predict we will see a meat tax and governmental subsidies doing their part by shifting to support more environmentally friendly plant based solutions. I also predict the slow decline of mass animal factory farming and the increase of delicious plant based dedicated food production.