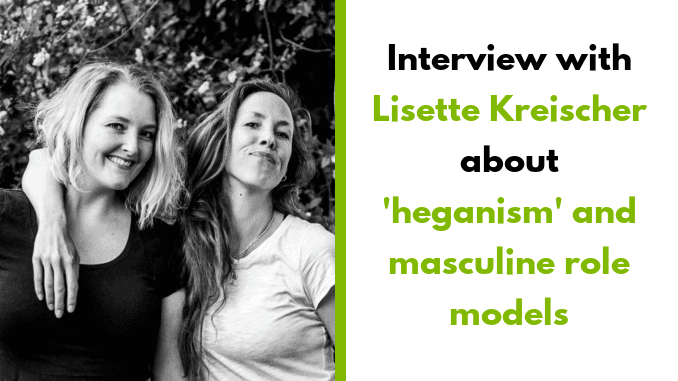 In this first part of our investigation into the emerging media trend towards “heganism” or the marketing of vegan food as masculine, we speak to plant expert, cook and author, Lisette Kreischer. Lisette is the author of ten books on vegan food and sustainable living, and is also the co-founder of the company behind The Dutch Weed Burger.

The term “Hegan” and the notion of the necessity of plant-based food geared towards men, has been discussed recently in the vegan media, and even in mainstream media such as this Telegraph article. Lisette Kreischer, co-author of Man.Eat.Plant., kindly discusses these issues with us, offering her special insight and knowledge on the subject. In the second part of this report next week, we will publish the results of a survey of men across North America, Asia and Europe who were asked their opinions on the “Hegan”.

Please tell us a little about the book Man Eat Plant, and what was the motivation to write it?
First of all, we need to mention that we are two women who have made Man.Eat.Plant. Two women creating a movement for men? Well YES! We are both vegan, daughters and girlfriends. We are also both entrepreneurs and we have seen and learned during the past few years that the plant-based kitchen, which we both love so passionately, is easier embraced by women than by men in general.

But veganism is not a women’s movement. It is a movement for the animals, for the earth and for all people.

After years of deep research and many interviews we have come to the conclusion that there are a lot assumptions mostly held by men in regards to veganism, the kitchen and eating animal products. Usually assumptions that are rooted in conditioning, imaging, marketing and often arise from deep-set emotions that are in the end all about… self-worth. This maybe sounds like something you would not expect, but we went deep, interviewed many men and this was the conclusion at the end.

For that re-framing is needed. Examples. New role models. What does a vegan man look like? What does he eat? How does he act? What are the new rules of the game?

Could you say a little more about the umami flavour? Do you think this is key to appealing to men because this “fifth flavour” is something more inherently more appetising to males, whereas females in general could be more drawn towards sweet or sour flavours?
Thanks to the worldwide introduction of Japanese and other Asian cuisine, umami is increasingly finding a platform in the West. For a long time, umami was characterized as “hearty,” “brothy,” or “meaty,” but that’s mostly due to the lack of a better term. It is actually the fifth taste, next to sweet, sour, salty and bitter. It was scientifically proven in 2000, that the human tongue has special umami taste receptors.

This flavour however was mostly forgotten for a long time in the vegan kitchen, making non-vegans most of the time find that they were ‘missing’ something when they would eat something plant-based. Fortunately times are changing. Vegan chefs are discovering ways to plant food with umami and Maartje and I made sure our whole Man.Eat.Plant. book is bombed with it.

Can you comment about the prediction for “masculine” vegan foods as a big trend next year? Do you believe this to be true, or simply a business gimmick?
I believe it is both. We live in times that we are addicted to images, to role models, to trends and influencers. We look to the outside to create someone we wanna be. But trends can only derive from something that is already growing beneath the surface. A marketing campaign can derive from something that is already going on. And right now there is a big discussion happening. We are looking at systems, at values, at habits and we are questioning them.

Traditionally, men have been told that if they want to be real men they have to act like this, dress like that and eat meat. Meat is for men, veggies are for sissies. This fortunately is being questioned, it is part of the evolution we are in. We question, we grow. People, so also men, are more and more looking into what it means to be a real person, to have values, to stand on your own and to stand up and speak out for something even though ‘it is against all odds’. So I don’t think it’s such a weird thing that there is also a new trend coming for ‘masculine’ vegan foods. It is part of a bigger process. It needs to be named so it can manifest as ‘the new normal’.

Do you believe it is more difficult for men to convert to veganism?
For a long time this has been the case. The vegan movement has been carried through history by woman mostly. It was easier for them because of the framework society offered, to be empathic beings. It is easier for women to show compassion and listen to what they feel. So, many women became vegetarian when there we just little girls. They made the connection and it was relatively more easy to say at home that they didn’t want to eat meat anymore. But men were told that it is masculine to eat meat, that you need the proteins and all of that kind of b*llsh*t.

But times are changing rapidly. The image of ‘masculinity’ is shifting, more information is presented, people do their research, vegan bodybuilders and athletes are showing their plant-based muscles so I think we are heading towards a tipping point, where more and more men will become vegan more easily.

In what ways, if any, should food for vegan men be different or marketed differently?
I think to reach more men and to promote veganism it should look differently than the vegan food that is presented mostly, which already seduces a lot of woman. Not to say it all has to be different to serve different sexes, of course not. It just has to be good food for everyone to love. But I do know for a fact that many men will not be seduced by raw food, a salad, a flowery pie or a chia pudding. Most men what something they recognise and something that will give them a feeling of satisfaction. Something they wanna put their teeth into.

For example. If I go out to eat with a woman and two men at a vegan buffet, there are salads, greens, condiments, but there is also dough, fried stuff, burgers, etc. You will see the differences in preference on the plates between the woman and the men. The woman will mostly have more light foods and greens and the men will have more of the fried foods and dough things. Of course this is all relative and generalising, but on the bigger scale there is a difference.