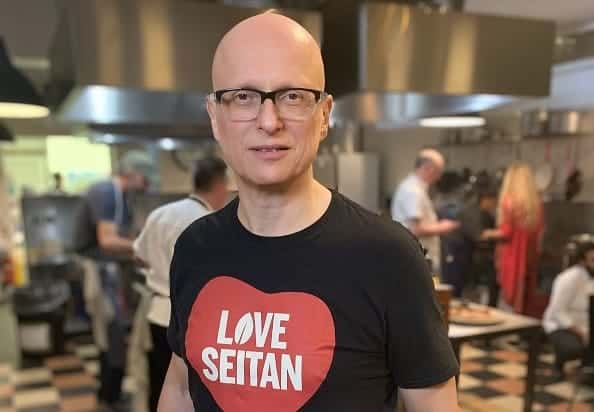 First established in 2017, LoveSeitan became quickly established as the leading UK brand for high-quality seitan products after receiving backing from vegan investor and entrepreneur Heather Mills back in 2018, and has been unstoppable ever since.

We were happy to speak with Stephen Swindon, MD and Co-Founder of the UK’s leading producer of seitan.

Tell us a bit about the story behind LoveSeitan – How did it all start?
We started the business in September 2017 making small batches of seitan in a domestic kitchen and selling it direct to the public through our website and at vegan fairs where we almost always sold out!  Since those early days, we’ve scaled the business up and now have a full range of products including burgers, bites, Facon Bacon and Pepperoni.

As a vegan alternative to meat, what makes seitan so appealing for consumers, and is it a sustainable product?
Seitan is a vegan meat alternative made from wheat. We regularly receive feedback from customers that it is more ‘meat-like’ than tofu and jackfruit, providing a satisfying bite and texture.  It is very high in protein, very low in fat and a source of fibre. As far as we know, we are currently the only UK bulk producers of seitan.

There is also a rich history behind the product. Seitan dates back to ancient China, almost 1,500 years ago. Buddhist monks in the sixth century discovered the wheat meat after soaking their wheat dough in water, removing all the starch, leaving a high protein wheat gluten. It is the original vegan meat replacement.

Apart from being around much longer than other vegan meat products, it is a very simple, honest product with no added chemicals, enhancers, preservative or other nasties to make it look or behave like meat. That’s because it was developed in a kitchen, not in a lab, with natural ingredients.

Where are your products commercially available, and do you have plans to expand in 2021?
We are now selling into supermarkets, independent shops, the hospitality sector and ready meal manufacturers and we recently got our first export order.  We plan to expand on all fronts in 2021 with key areas of focus on the retail and manufacturing sectors. Our stockists’ page can provide more details.

What was your bestseller in 2020 and why?
Seitan Pepperoni and Facon Bacon are exceptionally popular thanks to their unique textures and flavour. Seitan Pepperoni, in particular, has surged in demand more than any other product; we spent a long time developing the product to make sure it fits the pepperoni taste profile and satisfies the taste buds of even the most dedicated pepperoni enthusiast.

Why have you decided to remove soy from all your products?
The soy in our original recipes was from soy sauce which added flavour and colour to the finished product. We initially developed soy-free pepperoni for a manufacturing client that operated a soy-free site. We were so pleased with the result we decided to remove soy sauce from all of our recipes. The development process took a few months, but it was worth it as we ended up with an improved product with one less allergen and 40% less salt. As an added benefit dropping soy sauce and able us to gain kosher certification as our soy sauce was not kosher. Basically, it was a win-win for us. There are also other arguments, mainly environmental, that encouraged us to make the move.

What was significant about the launch of your ‘Seitan Pepperoni’ this year?
The launch of Seitan Pepperoni has been extremely important for us. The pizza market has expanded over the past couple of years with the demand for vegan options increasing at a massive rate.  To date, pizza manufacturers have been reluctant to use vegan meat alternatives which is probably due to the lack of good quality products that can survive the intense pizza cooking process. The meaty texture, appearance and flavour of our seitan pepperoni along with its ability to tolerate high cooking temperatures common in pizza ovens has provided pizza producers with a fantastic vegan topping option. The pandemic has prompted a big increase in the takeaway market with pizza being one of the most popular takeaway options – as a result, this market is set to grow further over the next few months.

LoveSeitan is now registered with The Vegan Society – A big step, what does this mean for your brand?
It confirms our commitment to providing a 100% vegan range of products in a very visible, recognisable way which is extremely important as more people turn to veganism.

We’re big fans of The Vegan Society; they work tirelessly to promote vegan businesses and encourage more people to adopt the lifestyle and diet. We are proud to align ourselves with them. We’re also very grateful and honoured that we now have the ‘Vegan Trademark’ for our product ranges. We expect the trademark to give extra reassurance to consumers on the lookout for our seitan.

What is your vision for the future, both short term and in the long run?
It is part of our mission to bring seitan into the mainstream so that becomes as well known as tofu and jackfruit. It offers many advantages over other vegan meat alternatives as it is a simple, honest, nutritionally clean product that is versatile and easy to use. We truly believe seitan will become more popular than tofu and jackfruit as it is higher in protein and has a more ‘meat-like’ texture and appearance.

From there, we want to expand our offering and product ranges and look beyond the UK. The sky is the limit for seitan! We’re looking forward to making our ‘made in a kitchen, not a lab’ recipes and process available to people around the world.