New study: “Clean Meat is the Future of the Meat Industry”

Clean meat is a seriously interesting topic which has generated massive amounts of publicity and debate in recent months, with biotech startups and cultured meat manufacturers such as Beyond Meat and Impossible Foods creating mass interest and global coverage with their brands of “bleeding” burgers. Faunalytics, a nonprofit research organization, recently conducted a study with the support of researchers from the University of Bath and the Good Food Institute, amongst others, called Messages to Overcome Naturalness Concerns in Clean Meat Acceptance: Primary Findings. Here we have the first interview with one of the research team regarding these enlightening insights.

The results of this groundbreaking study which can be found here, showed that 66% of people were willing to try clean meat, 53% were willing to eat clean meat as a replacement for conventional meat, and 46% were willing to buy it regularly. But what are the further implications and what impact will clean meat have on the meat industry? Chris Bryant, Doctoral Researcher from the University of Bath, explains.

Please briefly explain what is “clean meat” for any readers who are unaware.

Clean meat is real meat grown from animal cells rather than by rearing animals. It is identical to conventional meat, but it can be produced without the ethical and environmental implications of raising animals for slaughter.

Clean meat is not available commercially yet, but it is likely that we will see it in supermarkets within a few years.

Why is clean meat important and necessary at this point in time?
There are three main benefits of clean meat. First, it means animal products without the animals, so less animal suffering and slaughter. Second, clean meat is far less damaging to the environment compared to conventional meat. And third, it addresses a lot of the public health concerns about foodborne infections and antibiotic abuse in animal agriculture.

How do people feel about lab-cultured food according to your study? What are the potential dangers if any?
On the whole, the findings were remarkably positive for clean meat! About two thirds of participants said they would be willing to try clean meat, and over half were willing to eat it instead of conventional meat.

We originally set up this study to investigate ways of addressing consumer concerns about naturalness, but we found that for most Americans, this was not a big concern! It seems that people recognise the benefits of clean meat, and most are willing to make the switch.

There are many safety benefits of clean meat. Being produced in a clean facility means that it eliminates the risk of salmonella, e coli, and other foodborne diseases commonly found in conventional meat. Of course, food safety will be the number one concern for regulators, and rightly so. Robust regulation will play a big role in ensuring public trust in clean meat.

Is clean meat aimed towards vegans or meat-eaters primarily?

Clean meat is for people who want to eat meat! Most vegetarians and vegans say they would not eat it, but to be frank, that is not terribly important. They already don’t contribute to the problems caused by animal agriculture, so there’s nothing to be gained from them switching to clean meat! The real benefits come from meat-eaters switching, and because meat-eaters are a much larger market than vegetarians and vegans, this is who the industry will focus on selling to. Clean meat will allow meat-eaters to have their steak and eat it!

What, in your opinion, does the future look like for the meat industry?
We have already seen signs that clean meat is the future of the meat industry. Clean meat companies have attracted investments from Bill Gates and Richard Branson – but perhaps most importantly, from a number of huge meat processors including Tyson, Cargill, and Bell Food Group.

The players who know the meat industry best of all seem to agree that clean meat is the future. In a few decades, farming animals for meat could be obsolete. 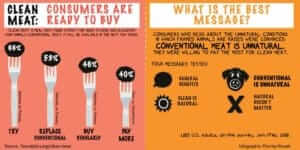 Who are the key players currently in the clean meat market?
There is an ever-growing number of start-ups in the clean meat space. The key players in terms of investment and product development are JUST (formerly Hampton Creek), Memphis Meats, Mosa Meats, Finless Foods, and SuperMeat. These companies, from the U.S., Israel, and the Netherlands, have all attracted multi-million dollar investments.

It seems likely that JUST will be the first of these companies to bring a product to market – they say they will be ready by the end of 2018.

Why are your findings pertinent to the vegan movement and what do they suggest about veganism moving forward?

It has been fantastic to see veganism become increasingly mainstream in the last couple of years, but the truth is that most people are not willing to give up meat. The number one reason (according to the poll reported here) is because they like meat too much. Clean meat, along with other animal products produced using similar methods, will soon be able to give consumers the chance to eat whatever they want without the ethical and environmental cost of doing so.

Anything surprising or outstanding from your results that you would like to mention?
The finding that two thirds of Americans would eat clean meat is very similar to another U.S. survey published in 2017.

One thing that did surprise us, as researchers interested in overcoming the problem of people seeing clean meat as unnatural, was that most people were not too concerned about this. Clearly, most people saw the benefits of clean meat enough to overcome that reaction!

Please feel free to add anything else which may be of interest to our readers.
Regulation of clean meat and other cell-cultured animal products is currently being debated in the U.S. where the Food and Drug Administration and the United States Department of Agriculture are both vying for authority. Most clean meat advocates favour regulation by the FDA – it seems they would be more able to do this, given that they currently regulate over 80% of food in the U.S. including other products produced by cell cultures (such as yeast and mycoproteins).

A related point is on the cells used – some vegans object to clean meat because it still requires cells to be taken from non-consenting animals. Some companies are exploring the possibility of using cell lines which do not need to be replaced (so animals can be taken out of the production system once it is going). JUST recently made clean chicken using a cell taken from the feather of a chicken rather than a biopsy, which is also a cruelty-free alternative!