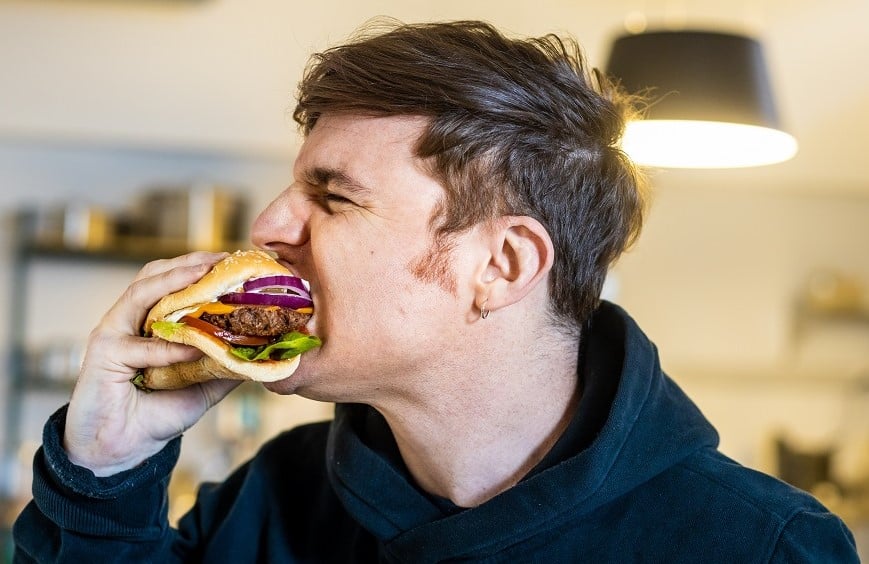 Awarded the number one Latin American spot on Fast Company’s list of the World’s Most Innovative Companies in 2021, NotCo is undoubtedly one of the coolest and most exciting startups in the plant-based world right now. Not least for the fact that it is set to become the first Chilean Unicorn company in its upcoming IPO.

This foodtech disruptor is taking the market by storm with its innovations and piquing the interest of high profile global  investors including Jeff Bezos and Danny Meyer. The Chilean startup is using its patented artificial intelligence to revolutionize plant-based food production and is already distributed in markets across the Americas including a new base in New York.

“The possibilities are endless. We are excited to see where it will take us.”

Having just been awarded the prestigious Innovation Challenge from Roquette at the Future Food-Tech Summit, we were excited to finally catch up with CEO Matias Muchnick to talk about the aim of being a plant-based Unicorn, plans to upscale, and the role of AI in the industry.

What’s the story behind the NotCo concept and how was it born?
Consumers believe that switching to plant-based means you have to make sacrifices. Two thirds of dairy consumers are open to plant-based milk, but taste is still a barrier. We wanted to create a product that eliminates the need for consumers to make a trade-off. Five years ago, we set out on this journey and have since become the fastest growing food tech brand in Latin America.

Our products taste and function just like the “real” thing because we utilize a proprietary artificial intelligence technology, Giuseppe, which matches animal proteins to their ideal replacements among thousands of plant-based ingredients. Since then, we’ve launched in several food segments including dairy, eggs, and meat in five countries, Brazil, Argentina, Chile and Colombia and now the US.

Can you tell us more about the recent investment from EHI? What will it allow the brand to achieve?
Our latest investment from Enlightened Hospitality Investments (EHI) was an extension of our $85 million Series C Round. If you’re not familiar, Shake Shack founder and QSR trailblazer, Danny Meyer, is a partner at EHI, a growth equity fund that invests in the hospitality, technology and consumer industries. EHI has notable investments in GoldBelly, Banza, Clear and Resy.

This investment will be strategic for us in boosting our ability to expand into the U.S. and New York City foodservice market. We’re excited to see where this journey might take not just us, but our technology and the future of plant-based with Danny’s business leadership and expertise playing a pivotal role.

We know the brand is looking to achieve Unicorn status and become the first Chilean company to do so. What would that mean for you as a company and for NotCo’s native land?
This investment put us one step closer to achieving that $1billion mark. It is EHI’s first investment in a food tech company utilizing artificial intelligence to come out with plant-based products that match their animal-based counterparts. We’re excited to trailblaze this sector and represent Latin America and specifically Chile. The region is quickly adopting plant-based options and is a key player in the journey to produce more sustainable and tastier plant-based replacements.

“We are the only global company to disrupt massive food and beverage simultaneously.”

As a plant-based Unicorn, will the brand aim to disrupt the market and challenge the biggest players such as Beyond Meat?
Since day one we’ve been looking to challenge the industry as a whole. Unlike companies that focus solely on alt-meats or alt-milk, we are the only company already selling products in key animal protein substitute areas with NotMilk, NotBurger, NotIceCream and NotMayo in five different countries. We are the only global company to disrupt massive food and beverage simultaneously. Unicorn status will allow us to continue to develop the technology and our portfolio and challenge some of these larger players even more.

NotCo was recently ranked on Fast Company’s list of the World’s Most Innovative Companies in 2021, ranking #1 in Latin America and in the top 50 globally. What makes NotCo so innovative?
We aren’t just milking nuts or oats. Our patented AI technology, Giuseppe, is the key to rapid advancement because it’s constantly learning. It uses proprietary databases of ingredients and recipes to find different and unexpected plant combinations. In short, Giuseppe analyzes an infinite amount of recipes until it gets it right. It allows us to deliver plant-based derived options faster, better, and more accurately that taste, cook, and function just like their animal-based counterparts.

We have a unique team working behind Giuseppe, bringing a combination of scientists, culinary chefs, designers and engineers in four countries working together globally and providing feedback to Giuseppe. We were awarded a first-of-kind patent for food formula generation technology. The patent covers applications ranging from deep analysis and understanding of animal and plant-based food.

How important is the role of AI for the future of the plant-based food industry?
AI and technology are the future of plant-based. We have the technology right at our fingertips, we just need to use it to our advantage. In just a few years, we’ve been able to breakthrough and produce some ground-breaking innovation. With the continued development of AI in food tech, the possibilities are endless. We are excited to see where it will take us.

With such a varied product range of plant-based alternatives, how does NotCo select which product markets to pursue?
We are constantly growing and developing what we can do with Giuseppe. We started with NotMayo, but saw the need to produce products beyond that – in meat, dairy and now, the sky is the limit. We’re currently available in more than 6,000 stores globally and we have aggressive plans to scale.

Which of those products are the biggest sellers?
Our #1 seller is NotMilk given the size of the market, closely tied now to our second most sold item NotBurger. In all categories we play in, we have seen significant growth having consumers enjoy our projects and make the transition to plant-based.

How has the plant-based scene in Latin America developed and where do you see it going in the future?
Our goal is to accelerate the rapid advancement of science-driven plant-based alternatives that consumers will be quick and willing to adopt. Our partnerships in Latin America include Burger King, Papa John’s and more, so it’s evident that food service is adapting to consumer demand and evolving to fit the need.

What’s next on the horizon for NotCo? Will the rest of the portfolio become available in North America? Are Europe and Asia next in line for expansion?
Our goal is to continue what we’ve been doing but on a larger scale. We launched NotMilk in the U.S. nationwide at Whole Foods Market just a few months ago, and already have confirmed distribution in more than 3,000 stores this year alone and are on track for 8,000 by end of the year. We’re also launching into foodservice this July through partnerships with more than 100 locally-owned cafes and coffee houses in NYC.

We are always looking for ways to develop science and expand the plant-based industry as we know it. This year, you’ll see a few fun and delicious launches as we continue to expand into the US.

I can’t tell you what they are just yet, but I will be sure to circle back once I can…