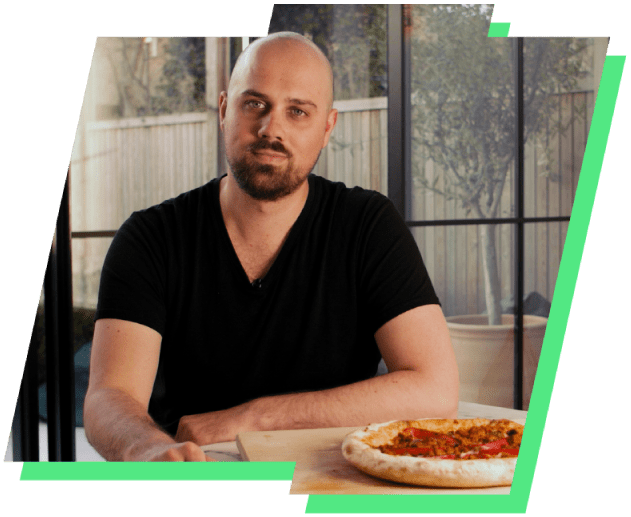 NXT LVL PZA is taking London by storm with its secretly vegan pizzas created in collaboration with some of the biggest names in vegan food as part of a mission to make vegan pizza the market standard rather than just a menu option.

We were curious to get the story behind the hype from Founder Fabio Matticoli who reveals some ambitious expansion plans moving forward, and discusses why secretly vegan is an important part of NXT LVL’s strategy.

“A recent customer even asked for a vegan option to be added to the menu after ordering from us. He had no idea that our entire menu is 100% vegan”

To do so, we’re currently partnering with 16 innovative leaders in the alternative protein industry – with THIS, Beyond Meat, Meatless Farm, Violife, Heura, Fable, Pleese Cheese and Good Catch among others.

Our partnerships give us first line access to the newest and best plant-based ingredients, and with sponsored toppings as well as brand collaborations, we’re able to drive down costs for ingredients and marketing. We then pass on this cost advantage on to our customers.

We aim to deliver faster too, in 30 minutes or less, with a third-party operated host kitchen model that allows us to bring the delivery radius down to 1.5 miles.

Where can customers find you and how many customers are you serving?
For our pilot location in Nine Elms, London, customers can order pizza online for delivery at www.nxtlvl.pizza/ or through Uber Eats, Deliveroo and Just Eat. Having only opened in November 2021, it quickly became one of Deliveroo’s top-rated pizza restaurants in the area with a score of 4.6, and a 4.7 on Uber Eats. We’ve also just launched on Just Eat, so we don’t have a rating there yet.

This month, we launched a pop-up store in the heart of Soho. We’ve loved engaging with our customers and getting immediate feedback, so we’re looking to keep it open through March too. Stop by and visit us at 68 Old Compton Street, London to get a 7‘’ pizza for just £4.

Why is it important for NXT LVL PZA to partner with some of the biggest names in plant-based?
We want to make sure that no one has to compromise on taste, whether they’re a meat-eater, flexitarian, vegetarian, or vegan. Working with the most cutting-edge foodtech brands helps us to achieve just that whilst growing ourselves through brand collaborations. However, our mission is to use our pizzas as a platform (quite literally) for the best ingredient innovations out there, so we don’t just work with big brands, but also smaller challenger brands so that we can help to bring more game-changing products to the mass market.

You describe your pizzas as “secretly vegan”, what does that mean?
It means that as a brand we don’t shout about the fact that we’re vegan. The alternative protein market is predicted to hit $290bn by 2035, yet 89% of consumers are still sceptical of vegan food. Being solely a vegan brand is not going to reach that remaining 89% and it certainly won’t make us the next Domino’s. Consumers want tasty, affordable pizza delivered straight to their door. If those boxes have been ticked, we’ve earned the right to introduce ethics to their plate as well.

Since we launched, we’ve had great consumer feedback with several people not realising that our pizzas are even vegan. A recent customer even asked for a vegan option to be added to the menu after ordering from us. He had no idea that our entire menu is 100% vegan. In my opinion, this is the best way to get vegan food to appeal to the biggest possible market.

Why is NXT LVL PZA crowdfunding?
We’re currently running a crowdfunding campaign on Crowdcube to raise money for a future where animal-free pizza is the standard, not just an option. Our overall ambition is to have a big impact and to do that we need to grow; we plan to quickly expand through a network of third-party operated host pizzerias. They act as micro fulfilment centres for NXT LVL PZA, meanwhile, we focus on upstream supply chain, marketing, and expansion.

Why did you opt for a gaming focus for NXT LVL PZA’s branding?
Our initial main target market is students, so gaming seemed like a natural fit. It’s inclusive, fun, and increasing in popularity. It is something that millions of people do and enjoy every day, and that’s what we want for our food!

The gaming market is currently set to hit $314.4 billion by 2026, and we want a slice (pardon the pun) of that action. In the end, it’s quite simple: if we can capture people’s attention with our game-inspired branding, they’re more likely to try our pizzas.

What is your expansion strategy for 2022?
We’re currently working with pizza operators to bring our food to at least 20 locations in and around London this year, and we will also open the first self-operated flagship store.