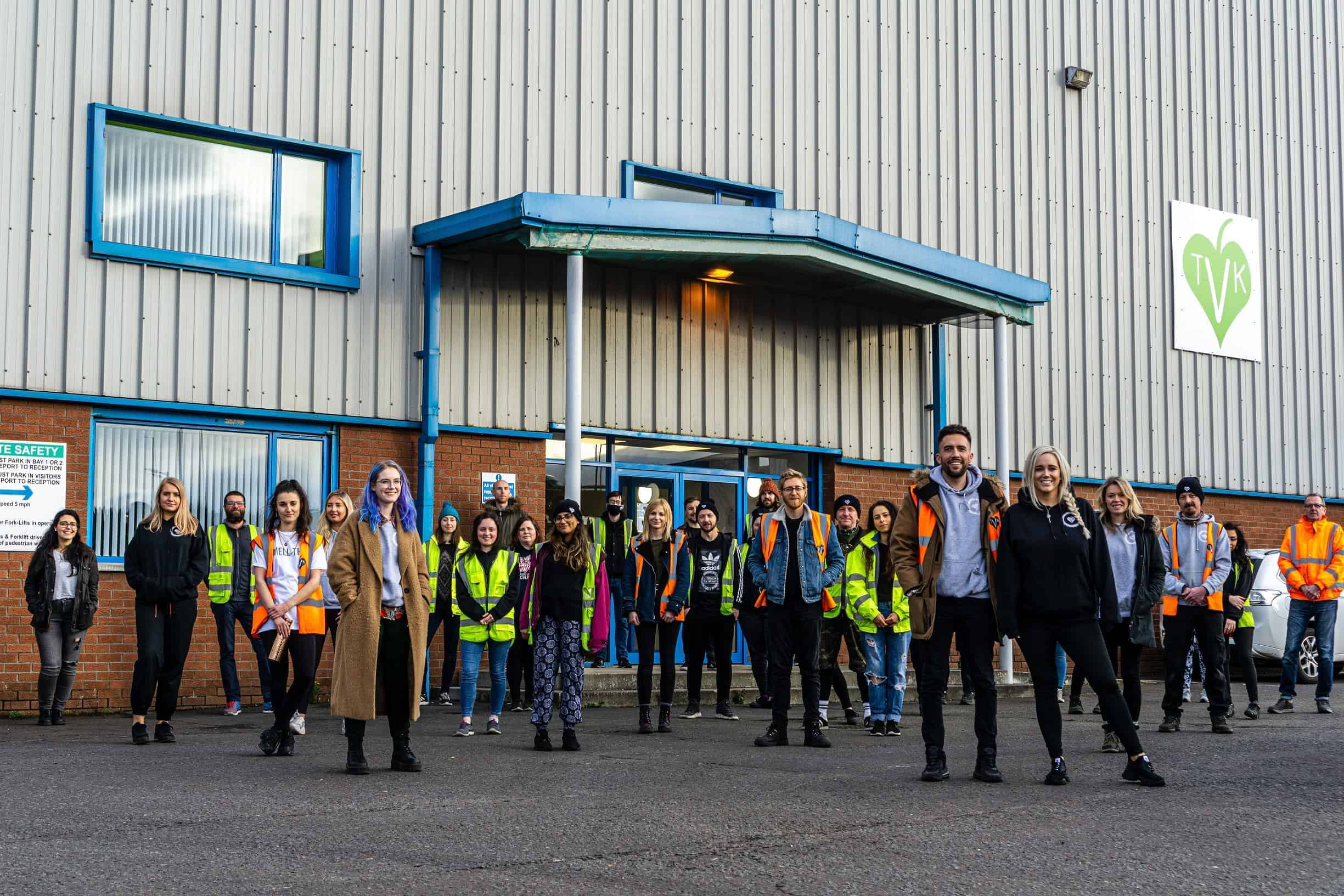 The VeganKind is a well-established, fast-growing, and hugely popular vegan delivery box producer based in Scotland. Here at vegconomist we have reported on this founder-couple’s string of successes on a seemingly constant basis, and this is a much-loved company to so many in the UK – so it was way overdue that we had a chat about their incredible success in the plant-based market.

We finally, and happily, got to speak to Co-Founder and CEO Scott McCulloch, who along with wife Karris, operates the UK’s leading 100% vegan and plant-based e-commerce / delivery box platform.

While most of our UK readers will be familiar with the VeganKind, please introduce your brand to our global readers.
We are TheVeganKind, and our mission is to make a vegan lifestyle easily accessible to all! We have monthly subscription boxes which arrive at your doorstep showing you new and exciting vegan products each month, and we also have the UK’s leading 100% vegan and plant-based online store, TheVeganKind Supermarket!

TheVeganKind started out back in 2013, how did you come up with the idea for the business and what difficulties did you face at that time? What are some of the biggest or most surprising changes you have seen in these 8 years?
So, the initial idea was conceived by Karris, my co-founder (and wife). We had been experimenting with veganism and knew that people were more likely to stick to it if it was made easier for them. We knew of the subscription box market and the growing trend of subscription products, but no one in the UK was doing a vegan one.

One night, Karris mentioned it would be cool if we could set one up – and from that moment on, we never looked back. The business has changed immeasurably since then. Back then it was just Karris and I, packing boxes through the night in our flat, with a baby and dog at our feet, whereas now we are a team of 60+, operating out a 35,000 square foot warehouse!

Some of the difficulties we faced at that time were centred around cashflow and thusly our ability to invest in the business. We hadn’t raised any money, and didn’t have any staff, and we both had full-time jobs. So TVK was founded on sheer grit, hard work and determination. We used every spare penny we earned to get the business up and running. In terms of surprising changes – we had something like five vegan cheeses when we launched TVK Supermarket – but we now have over 200+! I don’t think I would have forecast that amount of vegan cheese!

Around this time last year, you successfully ran a crowdfunding campaign raising over £300,000 target in just 2 days, how do you attribute this success?
We spent a lot of time preparing our followers and customers about this unique opportunity to own a piece of TVK. We really do feel we have played our part in the growth of veganism over the last seven years, amassing a total social following of over 600,000 people on Instagram alone. This meant we had plenty of people to shout to about our raise.

We actually ended up raising over £600k with over 2,500 people joining, making it the most supported vegan crowdraise the UK had ever seen at that time!

Since then, of course, the world has suffered the effects of the Covid-19 pandemic. How has this new business landscape affected your sales, and where do you see TheVeganKind in a post-Covid age?
When Covid hit it was like our business was sucked up into a tornado! Our order volumes just kept going up and up as more and more people were panicking and trying hard to access food and drink. It was actually quite a scary time and we really did feel a burden of responsibility to get food and drink out to as many people as possible.

We ended up limiting the amount of any one product that people could buy, and limiting the maximum basket size, just so we could service the very maximum amount of people. Sales grew to such a volume that we ended up having to move warehouse in the middle of a pandemic (hopefully for the first and last time), but that then gave us a platform to really go on and grow from in 2021.

A post-Covid age TVK is going to see even more people curious about what ‘vegan’ or ‘plant based’ even means. People that have half an eye on the future and who want to contribute to a more equitable and harmonious ecosystem. People that when they find out about it, will feel very aligned to TheVeganKind.

Which products would you say are your biggest sellers and why?
Dairy and meat replacement products such as THIS Isn’t Bacon, Applewood Cheese, Tofurky, Heura and soon OmniPork – those types of products are always popular. Products that taste so good/realistic that people say ‘Wow, I can’t believe that’s vegan’. We also sell a tonne of vegan chocolate, because really, who doesn’t love delicious, creamy milky vegan chocolate!

You also recently moved into a new facility which is eleven times bigger than your previous location, can you tell us a little about the move and what this has meant for The VeganKind?
We were trading out of a warehouse that was not serving our growth ambitions. People now expect TVK to have the latest products as soon as they arrive on the market, and in order for us to continue serving our customers in this way we just simply had to move to larger premises, and I am so glad we did. Our new TVK HQ has provided the platform we needed for this next level of growth.

We can scale up here and continue to expand different departments without worrying we will run out of space. It has given us a fresh start. A new beginning. And we could not be more excited for the future!

Could you tell us about TVK+, your new loyalty scheme?
Sure! TVK+ is our membership scheme that allows customers to shop at TVK Supermarket and see over 50% of the products at a discounted price. TVK+ membership is currently free to our subscription box customers. Basically, if you are reading this right now and you are already a subscriber to one of our boxes – pop on over to TVK Supermarket, login and voila, you will see 2,500 products at a discount! You will also see a different banner on the home page, letting you know what that month’s “hero” products are where we have achieved extra special discounts for you, such as for February where TVK+ customers will get a huge 26% off One Planet Pizza products!

Do you have any other exciting plans for the future that you can share with us?
We have a range of meals coming out this week under our new sub-brand, Love Plants! We have 3 varieties – Chick’n Arrabiata, Chick’n Korma and a Thai Green Chick’n. All three products use THIS Isn’t Chicken in the meals and they are absolutely DELICIOUS! When Karris and I tried them for the first time, we looked at each other and said at the same time ‘Wow, those are the best vegan meals I’ve ever tasted!”

We are really excited to launch. Watch this space! We plan on doing a lot more NPD in the coming 24 months. Also, more repeat purchasing. If you have 5-10 staples that you simply must have in your fridge, then let us deliver them to you on a subscription-basis without lifting a finger! We will roll this feature out to a select group of TVK+ customers at first and then work on growing that service. We also expect to launch a marketplace in H2 this year.

No one really knows about that bit yet, but broadly speaking we have the infrastructure being worked on and just need to roadmap it out, and then launch! We want lots of smaller, artisan brands to be able to benefit from the TVK brand as it grows. We can direct traffic to their brand on the marketplace and then they can deal with the fulfilment of the orders and service of the customers. It means we can continue to help support as many small, independent vegan businesses as possible.

Many brands have said before that TVK really helped pave the way for their growth and success when we either featured them in our subscription box or listed them in our supermarket – and we don’t want that feeling to stop as we grow.

And finally, as CEO of a successful and rapidly growing vegan company, what trends and directions do you predict for the plant-based business world in 2021?
I think we are going to continue to see immense amounts of innovation. The alternative proteins market is growing rapidly, with new tastes, flavours, textures, synergies and breakthroughs. Right now, someone is working on the next big thing – the next liquid egg replacement – the next vegan caviar – the next vegan foie gras – the next vegan tuna steak – even the next vegan fried egg! It is all coming, and coming in abundance.

Soon enough, there will be no reason to eat animals as there will be alternatives for everything you can imagine, and loads of options in each category. That is the world I love the sound of, and one I feel with TVK we are heavily contributing to.

Plant Power all the way!