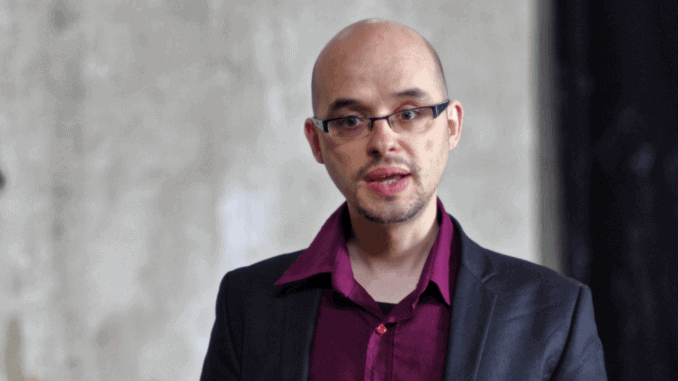 Since the below interview was first published we received several comments on social media, which we welcome at vegconomist.

Tobias Leenaert is a co-founder of ProVeg who recently published his book “How to Create a Vegan World – a Pragmatic Approach”.

As the vegan movement grows exponentially, as will opinions differ. There are a number of varying points of view within the vegan movement and each individual vegan has their own personal motivations which we of course feel passionately about. There are intersectionalists within the movement, there are those motivated by health, by environmental issues, and those who identify strongly as ethical vegans. We at vegconomist strive to invite open conversation and encourage debate, and remain impartial to a certain degree.  Our role is to contact and publish the opinions of the key players in our growing movement, and those opinions are not specicfially those held by the editorial team. Our position is not one of censorship. Debate is healthy, and we should encourage discussion as much as possible in order to open minds and move forward as a collective.

Here follows the responses from Mr Leenaert in relation to the topic of clean meat, one which in itself is interesting and at times controversial.

How can a vegan world be created?
There are probably many ways, but I don’t don’t think the fastest way to that aim is by just focussing on creating more vegans. I believe a critical mass of reducers can be achieved much faster, and is the thing that will tip the system. Reducers are still the main drivers of demand for vegan products, and when supply follows their demand, it becomes easier and easier for people to progress on the vegan spectrum. Compare this with glutenfree: glutenfree is a big thing not because of the demand coming from one percent of people suffering from celiac’s disease, but rather because of the ten percent of the people who choose to be partly or largely glutenfree, and who aren’t all that strict about it.

I also believe many vegan advocates are too focused on moral arguments, idealistically wanting other people to care for animals just like the vegans do. However, as long as it’s not easy enough to stop eating animal products – and yes, it is still too hard for most – it will be hard for people to care about animals. People are, in that sense, ‘steakholders’. What we need to do is make sure people can eat vegan for whatever reasons, to whatever degree, and then an attitude shift will be much more likely to follow.

Will Clean Meat throw a wrench in the meat industry machine?
It very possibly may. I suspect that part of what clean meat provides is something psychological rather than a still more convincing taste or texture. Plant-based products may become really indistinguishable from animal products, so in the sense of taste or texture they might be redundant. But some people may require the thought that they are eating real meat. In any case, once we have a clean meat product that is identical to animal meat, but is cruelty-free, more environmentally friendly and possibly healthier, one would have to be psychopath to keep wanting the original thing. I suspect clean meat can be the technological revolution that precedes a moral revolution.

In what ways is the dairy industry trying to sabotage the plant based food movement?
The dairy industry in Europe has successfully lobbied for plant-based dairy alternatives not to be able to have dairy-style names anymore. In other words, producers can’t label a vegan cheese as “cheese”. These lobbying efforts date from a few years ago, and I expect we will see less and less sabotaging in the future, because Big Animal Food is slowly but surely buying into the vegan market. Whether they are launching their own plant-based alternatives or buying plant-based brands or companies, once they are financially invested, these companies will find less and less reason to sabotage the growth of plant based.

Will hybrid products of the meat and dairy industry be successful?
On a structural level, hybrid products sure can help to decrease demand for animal products. Imagine if all sausages were seventy percent meat instead of a hundred percent. That’s a lot of animal suffering spared. Some people might object that customers might become complacent and that we’d just be stuck to partly veg/partly animal products, but I think psychologically these products can also help shift mindsets, where people start to become less and less dependent on animal products. It would be good to have some research about this though.

What are the potential benefits in meat or dairy companies who invest in vegan companies?
First of all, with their experience and knowhow, big companies can develop real qualitative products, or help improve the products they are acquiring. I heard an Alpro executive say that being acquired by Danone will allow them to use Danone’s longtime expertise in fermenting – which they can use very well to further improve their yoghurts. Secondly, due to their bigger advertising budgets, as well as their contracts with many retail players, big companies can help increase the reach and market share of vegan products. I recently saw a slide about the market penetration (how many people tasted a certain product) of vegetarian and vegan products. The products from typical veg companies had a market share of a couple of percent, while the veg products of a big meat company with huge reach had a market share of close to forty percent!

Why should people read your book “How to Create a Vegan World”?
I think my book provides insights that for many people might be new and – in our often too ideological and sometimes even a bit dogmatic movement – refreshingly rational. The book outlines a strategy to achieve a vegan world – that is a world with a minimum of human-caused animal suffering – with some non-intuitive ideas. There’s also a chapter on how the vegan movement should related to the commercial world of business, and a long chapter of communication skills. Many people – in reviews and personal mail – told me it helped them a lot in being a better advocate.