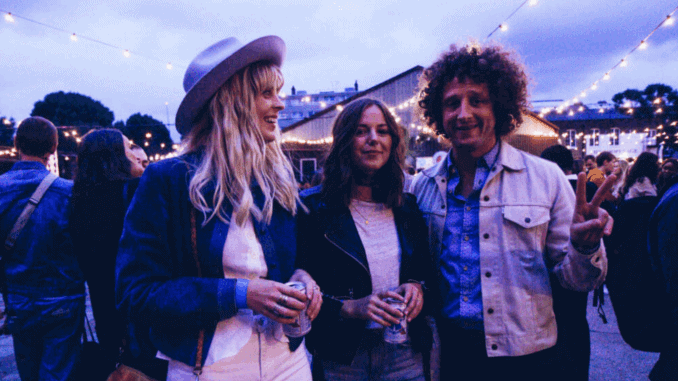 As veganism moves into the mainstream, more and more events, both in terms of business conference and seminars to social events, are cropping up and selling out all over the world. The interest in healthy eating is clearly a major driver for this and both plant-based and flexitarian consumers are seeking alternatives to the usual selection of alcohol and junk food that are traditional fodder for many social events. Vegan Nights is a hugely popular monthly event in London which demonstrates a microcosm of the vegan food industries and offers a great insight into up and coming trends.

Louisa Davidsson is part of the Vegan Nights Team at The Old Truman Brewery (London) and she focuses on running the social media channels for Vegan Nights. She describes the events as “London’s biggest and best vegan food & lifestyle party.” The event now features over 40 food traders (including Eat Chay, Jake’s Vegan Steaks and CookDaily), and several vegan lifestyle traders, who consistently challenge the perception of vegan food and lifestyle. Louisa kindly took time out of her schedule to answer some questions for vegconomist.

How did Vegan Nights get started?
Since the early 2000s, The Old Truman Brewery has hosted many varied and pioneering events; most recently from the likes of London Coffee Festival, London Design Fair, and Balance. Moreover, the Estate is a hub of creativity being home to over 300 businesses and several markets focussing on food, vintage fashion, design and collections. Representing different sub cultures and lifestyles is key to our popularity and being tuned into the rise of vegan food businesses, not only in our own markets but across London and the UK, one of the team members suggested pooling our traders together for one night with a party vibe to really highlight the change happening on the vegan food scene.

What can you say about the immense rise in popularity in veganism, and how has this been reflected in your events?
When Vegan Nights started to take shape, we knew we had to do things differently to anything that had come before. Several influencers have broken the old stereotype of veganism, by focussing on the joy of plant-based food. That’s probably a big part of the rise in popularity – encouraging people to challenge their perception of food is for everyone, not only for vegans. It has to be about wider appeal, for people interested in transitioning and that’s totally represented in the event by the people attending. We have created a space where people can have fun and supporting each other regardless of how they label each other – whether they are flexitarian, vegan or even a carnivore. The common tie is a conscious choice to enjoy a plant-based diet, not only for the animals, but for their health and for the environment.

What kind of people frequent Vegan Nights, do you see more female vegans for example?
The kind of people coming to Vegan Nights is varied, but they are all a great crowd and up for a good time! At first, we noticed a majority of women attendees, and then men, both around 18-35 years old. In the last couple of months, the number of men that engage with us and attend has increased. The crowds at Vegan Nights are a mix of people – from families, to young couples and groups of friends, we can see the demographic is becoming more and more diverse.

Which are your favourite food stands at Vegan Nights?
Haha, I always get this questions and I always reply with the same answer: ‘It’s like choosing who’s your favourite child!’ Everyone makes really great food; a couple of examples are Eat Chay (highly recommend their Banh Mi’s), Cupcakes & Shhht (their charcoal cupcake is to die for) and a team favourite is definitely Cookdaily, serving his insanely good “Chickn” Teriyaki bites. They sell out every event!

Which are the most popular and in-demand items at the food stands?
Indulgent vegan junk food is popular – Burgers, hot dogs, mac’n’cheeze, pizza and fried ‘chickn’! Desserts also do very well – cupcakes and ice creams. There is also a demand for the more healthy stands that offer freshly made juices (especially for those that want an alcoholic free option), tasty Acai Bowls and wholesome sushi wraps.

Can you identify any particular trends at the moment in terms of popular foods, or otherwise?
We are starting to see business (vegan as non-vegan) getting creative with food and come up with so many varieties of meat substitutes that are made from actual plants. When veganism started to come into the mainstream, you’d find fake meats like seitan, tempeh and Quorn, which can be quite unhealthy if you eat it on a regular basis. To now you can have southern fried wings made from cauliflowers, fish patties that started out as aubergines, and ‘bleeding burgers’made from only seven ingredients.

Another major trend – and what I believe will become more mainstream – is a more conscious and ethical lifestyle. A big part of being vegan is also to be wary of the impact the food industry has on our planet, how our waste end up in oceans and landfill, harming animals and the planet. We see a lot of people living on a plant-based diet that are also aiming to live by a zero-waste ethos – reuse to reduce – stop using single use cutlery/plates/cups/straws and buy less plastic. They take care of the planet and animals as much as we do for ourselves.

What are your future plans?
The unexpected…. No spoiler for now!