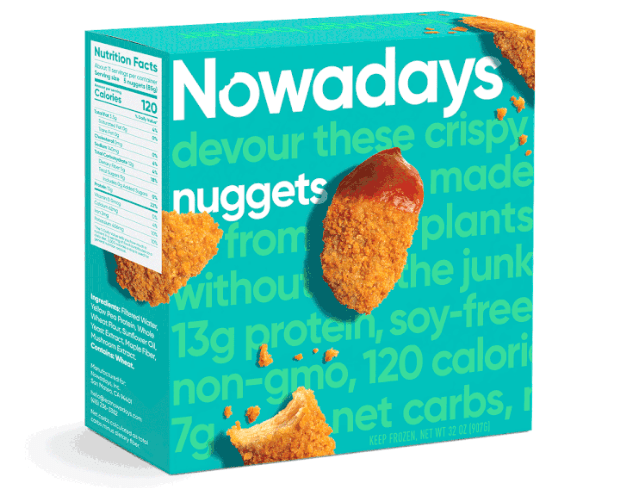 After raising $2 million in its pre-seed funding round, newly launched California brand Nowadays has launched what it claims is “the healthiest nugget on the market” which reportedly contains just seven ingredients. Founders Max Elder and Dominik Grabinski state that Nowadays was launched to shake up the processed junk food meat category.

“We’re taking the junk out of junk food by reinventing classic favorites with only a few simple, animal-free ingredients”

Elder and Grabinkski say that together they have a combination of three and a half decades of experience in the food industry. Dominik spent the majority of his career working for major ingredient companies including Cargill and DSM, while Max has advised groups such as Nestlé, General Mills and the Bill & Melinda Gates Foundation’s Nutrition Program.

The company claims the nuggets have the same flavour and texture as chicken nuggets. They are high in protein, low in sodium, and free of saturated fat and sugar. The company says it plans to launch a gluten-free version later this year, as well as “chicken” tenders.

The key ingredients are yellow pea protein, wholewheat flour, sunflower oil, plant-based fibre, yeast extract, and mushroom extract. The pea protein, which is non-GMO and grown in the US, is said to give a meaty texture, while the extracts provide an umami flavour. The flour and sunflower oil are used to create a crunchy breaded coating.

Nowadays is a Public Benefit Corporation (PBC) meaning it has both a fiduciary responsibility to its shareholders as well as a social and environmental responsibility to all of its stakeholders written into its charter.

The brand’s nuggets are now available to order online in California, and national shipping will follow soon. They retail at $39.99 for a 2lb box (about 50 nuggets), with a special price of $29.99 for first purchasers.