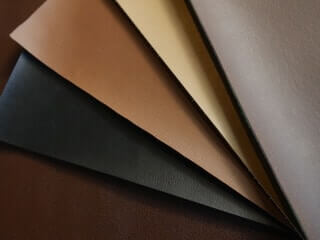 Mirum is said to have a carbon footprint 40 times smaller than conventional leather and 17 times smaller than polyurethane-based faux leather. In an interview with vegconomist in 2019, Natural Fiber Welding said it was working towards a future where “vegan will mean plants and never plastic”.

According to Allen Zelden, president of digital eco-conscious forum FUTUREVVORLD and founder of Intrinity Global, the investment “sends a very strong signal that we’re in for a very different future for materials”.

“Not only is this deal one of the first investments by a major automotive player into a deeply sustainable business, it also validates an increase in quality for leather alternatives beyond what has typically only been PVC,” he says.

It’s easy to be cynical about a car manufacturer investing in an eco-friendly company, but Zelden thinks there is real reason to believe the industry is changing. He points out that BMW has set a goal to cut carbon emissions by over 200 million tonnes by 2030, as well as allocating $300 million to invest in technologies that have “a strong focus on sustainability”.

The company has already begun upholstering the seats in its 5-Series cars with vegan leather, and in February it announced it would be entirely removing leather from the interior of the Mini.

“As the automotive sector works towards improving the sustainability of its manufacturing processes due to economic and environmental concerns, clearly investing in more Earth-friendly materials and leather alternatives will play a very key role in realising a low-carbon automotive future,” says Zelden.