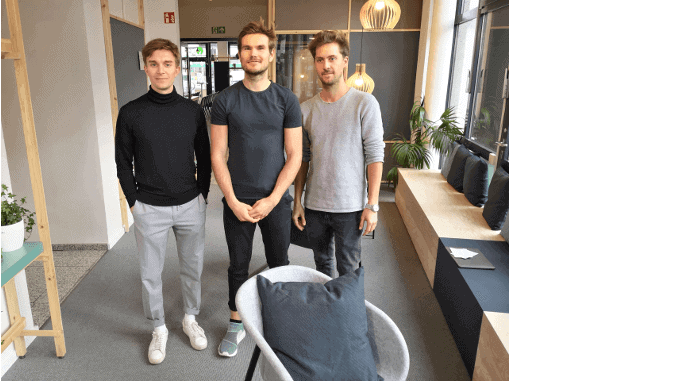 Vly, a German producer of pea-based milk, today announces an investment of €6.1M led by Five Seasons Ventures, alongside previous investors Global Founders Capital and Good Seed Ventures. The company will use the fresh funds to upscale in DACH and new European markets, including the UK, further product development and key talent.

“We have started with milk, but we want to create a range of new dairy alternative products”

Vly was founded in 2018 by Niklas Katter, Moritz Braunwarth and Nicolas Hartmann, who after 400 iterations in research and development, created the milk using yellow split pea protein. The finished product is said to be neutral in taste, high in nutrients, low in sugars, and is functional, meaning it can be used for everything from frothy coffee to cereal. It’s also more sustainable, just 1L of vly uses 15x less CO2, 13x less water and 5x less land, compared to cow’s milk.

After launched in Germany in January 2020, vly has experienced significant growth, scaling from the shelves of 25 stores to 10,000 after just 12 months, including major German supermarkets, such as Rewe and Edeka. Vly is already the sixth biggest plant milk brand in Germany and the company is also serving customers in Austria, Estonia, the Netherlands, and Switzerland. In addition to retailers and hospitality, it offers a direct-to-consumer service through its website which covers roughly 20 per cent of its business.

The Series A round will primarily be used to capitalise on vly’s growth to date, cementing itself in its existing markets before fuelling further expansion into international markets. The team of 15 based in Germany will be hiring across research and science, product development, marketing and sales, aiming to be 40 by the end of 2021. Vly will continue to grow its R&D platform and expand into further product categories such as its chocolate drink and fermented products that will launch in 2021.

Nicolas Hartmann, Managing Director and Co-founder of vly, commented, “From the beginning health has been a critical component of our vision for vly, experimenting with macro and micronutrients for the optimal product. We continue to invest in research and development for our products, innovating from within the company every day and staying close to the process. We have started with milk, but we want to create a range of new dairy alternative products, providing tasty and healthy options that will accelerate the plant-based shift. This funding and the industry expertise of our investors play a key part in moving us forward in this mission.”

Niccolo Manzoni, Founding Partner of Five Seasons Ventures, which led the round, added, “We scanned the entire European market for an innovative dairy alternative and decided to invest in vly because of its superior nutrition, functional profile and impressive team. In such a short period of time vly has experienced exceptional traction in the market. We see huge potential for the vly team, who are committed to making category-defining plant-based products.”