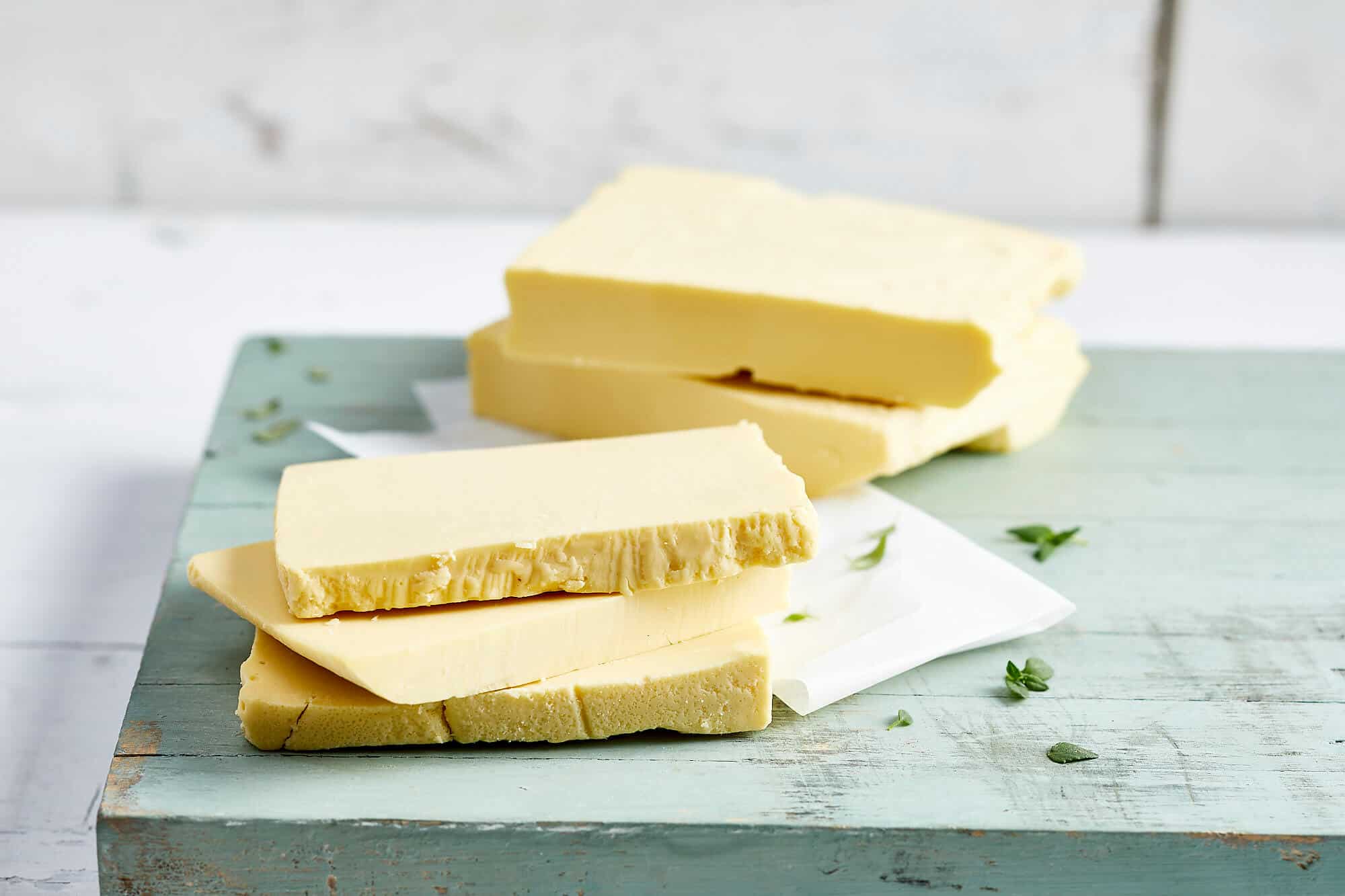 The analysis below is part of research by Future Grocery Shopping, an Amsterdam based research startup that develops insights in upcoming alternative food solutions, such as plant-based and cell-based food. The company, founded by Sew Ritoe and Herbert Frühling, has the ambition to become a leading player within these fields. The founders previously worked for leading companies in Tech, FMCG and Media and are dedicated to use and further develop state-of-the-art research solutions for the alternative and plant-based food industry.

Main points of the analysis:

As more and more supermarket shelves are filled with plant-based meat and milk alternatives, the next category of animal products is ready for a plant-based remake: the cheeses section. Germany is the leading market for plant-based cheese sales in Europe. The value of plant-based cheese products sold in German supermarkets has grown tremendously over the past 2 years from 17 million euros in 2018 to 44 million euros in 2020 (growth of 150%) and it is expected to continue its growth over the next few years.

Where does this growth come from? Although veganism is growing in popularity worldwide, studies indicate that the growing consumption of plant-based cheeses comes from mainstream consumers who are adopting new views on sustainability and animal welfare and want to reduce the amount of meat and dairy in their diets (so-called reducers).

Due to the increased demand, a growing number of companies started developing and successfully selling cheese alternatives. During our in-depth study of the German cheese market, we found quite a variety of cheese-like products being produced already: from plant-based products to replace common cheeses like Gouda and Cheddar to white cheeses like Mozzarella and Camembert. There are basically two kinds of plant-based cheese being produced at the moment: cheese analogues, which are mostly made from plant-based oil and starch, and fermented cheeses, which are mostly based on nuts.

So-called cheese analogues can be bought in most German supermarkets. They are intended to replace cheeses like Gouda, Cheddar, Parmesan or Pizza melt. Their recipes are relatively simple, using plant-based fats, starch, water and salt as their base. Flavors and colorants are added depending on the type of cheese they are meant to replace. Beta-carotene, for example, is often added for a yellow color to imitate Gouda or Cheddar. Some labels also add B12 vitamins to their product, which can be found in dairy products as well. German Television station ZDF published a video on how these cheeses can easily be replicated (in German). Cheese analogues come in blocks and slices (imitating Gouda or cheddar), shreds and as creams to replace cream cheese.

Besides the cheese analogues, there are cheeses that are made through the fermentation of plant-based material (nuts in most cases). They substitute traditional soft cheeses like Camembert, Ricotta, Mozzarella, and Feta and are produced just like their originals, with the one difference that plant-based milks are used instead of animal milk. They are fermented with the help of bacterial cultures. Although cashew nuts are the most frequently used base for this type of cheese, we also found companies using almonds, rice or soy as a base.

We identified over 40 plant-based cheese labels, offering over 90 different products in German online and offline retail channels. Just like for our plant-based meat market study, we divided the labels into four categories: pure and independent players, local and traditional companies, retailers and international FMCG companies. When looking at the labels active within this market, we see that few retailers and international FMCG companies have entered the market yet (compared to the plant-based meat and milk market), which we see as an indication that the alternative cheese market is still less developed and may offer opportunities for future companies and products.

Among the labels belonging to international FMCG companies are Violife (part of Upfield) and Green Heart, an Austrian company (part of Wojnar International). French cheese company Bel –  known for its Laughing cow and Babybel cheeses – recently entered the German market with their newest vegan brand Nurishh. It is interesting to see that Unilever, which has set its eyes on the market for plant-based alternatives, is yet to enter the German alternative cheese market with their own brands, indicating they might be on the lookout for a takeover.

Among the more traditional companies, we found local German, Swiss or Austrian companies that have been around in the vegan market for some time already. Most of them offer soy-based cheese alternatives from labels like Soyana, lord of Tofu, and Soyatoo. But also Wilmersburger (by vegan company Vekonto), which offers a wider variety of products based on more ‘modern’ ways of producing cheese alternatives, like oils and starches.

Among the independent and pure-players, there are quite some start-ups from France, Germany, and Italy that produce nut-based cheese versions. Many of them use cashews for their cheeses (Happy Cashew and Cashewrella). Interesting labels to mention within this category are Mondarella, with a cheese alternative based on Almonds and olive oil, and Mozzarisella, which uses Italian brown rice to produce a Mozzarella-like product. Tofutti is a US company that sells plant-based cheese alternatives based mostly on soy.

Compared to plant-based milk and meat alternatives, only a few traditional retailers offer plant-based cheese alternatives under their own labels. It is remarkable that those that do are discounters (Aldi, Lidl, and Penny) and (online) vegan retailers. Veganz is a German plant-based label that started out as a vegan supermarket chain and has evolved into a producer of their own plant-based products. They offer a wide variety of plant-based cheeses, like their Cashewbert, a product made of cashews and Macadamia nuts.

Although there are many plant-based cheeses being produced, consumers in stationary supermarkets have limited options to choose from. The main supermarkets offer sliced, grated and cream cheese analogues. Labels found most often in supermarkets include Bedda, Wilmersburger Violife, and the German market leader V-bites.

Discounters like Penny Markt, Aldi, and Lidl offer analogue cheeses under their own labels: Food for Future (Penny-markt) Mein Veggie Tag (Lidl) and Vemondo (Aldi). Occasionally we see nut-based cheeses being sold in supermarkets as well. Mondarella for example is sold by retailers like Lidl and Kaufland. In organic stores, we found little to no plant-based cheeses on offer, with the exceptions being stores like Denn’s (offering Sayve cheese), Bio Company (with Happy Cashew), and Alnatura with their own label plan-based cheese. Some online vegan specialty stores (but certainly not all) offer a much wider variety of cheeses. Vekoop, Kokku, and Vantastic-foods for example offer cheese analogues and fermented cheeses from many brands.

Although the sales figures above show a tremendous growth of plant-based cheese alternatives, consumers aren’t entirely positive about the cheeses: various studies showed that consumers who have bought plant-based cheeses are dissatisfied because of their price, the low nutritional value, and a disappointing – unnatural – taste.

Despite their negative response, or maybe just because of their dissatisfaction with the current supply, consumers indicate they would love to see more plant-based cheese products on their supermarket shelves in the years to come.

The combination of the growing demand for plant-based cheeses and the lack of options for consumers to choose from makes for an ideal environment for new companies that want to enter the market. In addition to studying the products, we spent time listening to what leading market players are saying. In order to be successful in this stage, it comes down to introducing the right product, with the right taste at the right price.

Getting the product right

It looks as though the cheese analogue market is already well-covered by international players like Violife and German labels like Simply V and Wilmersburger. A new entrant would therefore do well to focus on fermenting cheeses, where there is still room left. Lots of players have already set their mind on developing soft cheeses like Ricotta and Camembert: one reason is that the aging time of this type of cheese is limited and, as such, it is less time-consuming to develop a product. We haven’t found any fermented harder cheeses on offer yet, which could be an interesting opportunity for new players to focus on.

Getting the taste right

Getting the taste (smell/texture) right is seen as the most important factor to become successful. This is easier said than done, however: we learned from the industry that it has a hard time imitating cheese taste. Getting plant-based cheeses to taste like milk-based ones is the holy grail in the industry right now. It is commonly believed that in the next few years, a focus on innovation is needed to get there. Anja Leissner, head of R&D at Stockeld Dreamery (Sweden) believes that the way to crack the code is to combine plant-based proteins and have them behave like casein, a protein that is present in cow-milk and responsible for much of the typical taste of traditional cheese. Therefore, they plan to scale up their R&D department in the next few years. Other companies in this area share similar ambitions and rely on research and development to move ahead.

Prices of plant-based cheese products are higher than milk-based cheese, leading to dissatisfaction among some consumers. Mondarella CEO Piero Brunetti points out that their better food simply comes at a higher price: the almonds he uses are much more expensive than the (EU-subsidized) cow-milk that traditional cheese manufacturers use. Consumers are often not aware of this fact. In addition, he points to the role of the German ‘discounter culture’, making consumers less willing to pay a little more for a product that is of better quality. Fermented cheeses have the disadvantage that the fermentation process is still very costly and time-consuming, leading to a higher price of the end-product than cheese analogues. Violife CEO Anthimos Misailidis, who is also looking into improving the taste of his products, thinks that so-called precision fermentation is the way forward, where the fermentation process takes place on an ingredient level instead of during production, which could lower the costs of the end product.

After analyzing the German plant-based cheese market, we see that there are still some challenges to overcome in becoming a real alternative to cow’s milk cheese. Current developments look promising however and once the challenges are overcome, nothing will stand in the way for plant-based cheese to conquer the world.