The Plant-Based Food Market in Japan: Past, Present and Future

This article was contributed by freefrom Inc.

The vegetarian market has been growing worldwide, but Japan has taken a slightly different path than many other countries. In this article, we take a look at the history and market potential of Japanese plant-based food.

The tourism market and vegetarianism

According to a report by the Japanese Tourism Agency, there are 630 million vegetarians worldwide, and the number is growing year by year.

The tourism market has therefore been targeting vegetarians.

Is COVID-19 a turning point?

It appears that many Japanese people are worried about their health due to a prolonged period of staying at home. According to NHK reports, the percentage of people who are gaining weight could be as high as 57%.

It is estimated by the Japanese Tourism Agency that about 4% of Japanese people are vegetarians. The number may not necessarily be accurate, but the number of people who are “hidden veggies” (those who hide their vegetarianism),” “yuru veggie” (flexitarian), and eating veggie once a week is steadily increasing.

The Japanese vegetarian market is indicated in the chart below. 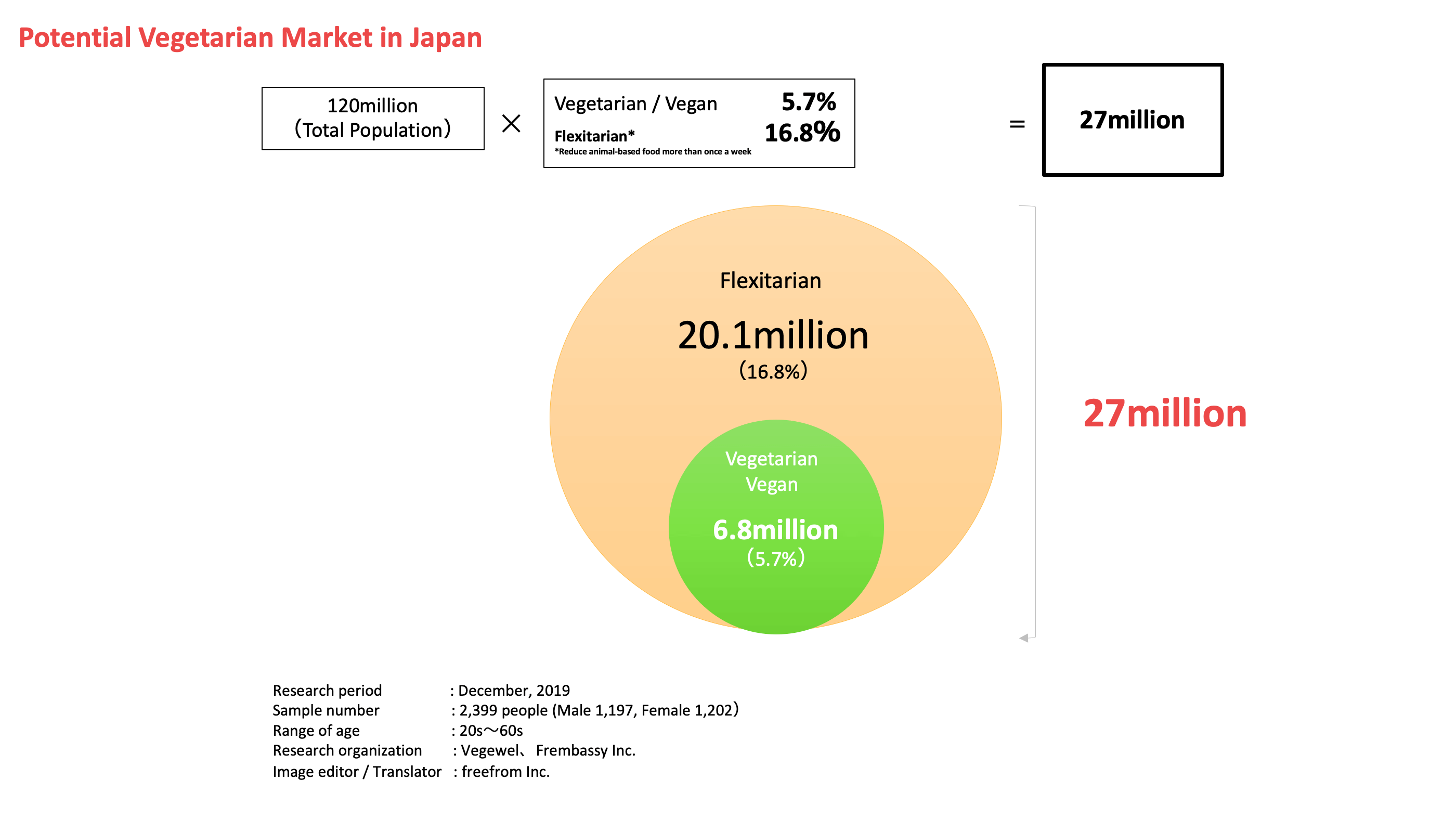 We conducted e-mail interviews with some corporations in the Japanese plant-based food market to find out more; these were the results.

The reasons for producing plant-based products vary from one business to another. However, there is a common element in the answers of larger companies such as Otsuka Foods, NH Foods, and Marukome: consumers’ preferences regarding food have been changing. The words “sustainability,” “guilt-free,” and “plant protein” seem to have become more common in describing people’s food choices.

As for medium-sized companies, they often become established by specialising in plant-based products. While several new food-tech ventures are emerging, there are only a few plant-based meat ventures, most of which aim to solve social issues. These include DAIZ and NEXTMEATS.

Some large corporations have struggled to keep the taste of products up to their standards without animal-based ingredients. Thus, some products contain egg white or other animal products despite being marketed as “plant-based”. However, large corporations have access to considerable financial resources and technology, and it’s not hard to imagine that they could improve rapidly.

On the other hand, medium-sized players tend to stick to vegan ingredients and have been exporting their products overseas. These companies include Karuna, Green Culture, and Saniku Foods. Many aim to expand their businesses internationally, so having 100% plant-based products is important.

Besides the competitors above, the products made by traditional food companies and foreign brands cannot be underestimated. Itsukiya has been producing Miso Tofu (tofu pickled with miso) for 800 years. This product tastes like cheese and has been gaining popularity in France, a country of food-lovers. While Beyond Meat‘s progress in entering Japan seems to have stalled, other companies are advancing, including the Japanese branch of Vegetarian Butcher (owned by Unilever), OmniFoods, (a plant-based brand from Hong Kong), and others.

Nestlé Japan has recently announced that it will introduce plant-based meat and consider production locally from 2021. The market in Japan should have room to grow immensely, and the country may experience a Renaissance of plant-based food.

The Power of Influence – Macro vs Micro-Influencers
May 16, 2022