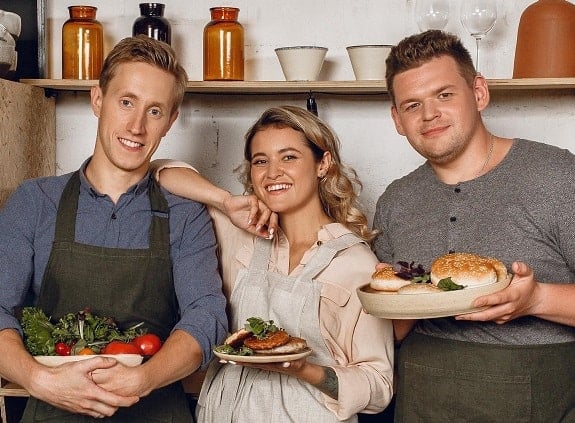 Just two years ago, you could buy plant-based products in Russia mostly in specialized shops, with rare exceptions in regular supermarkets. Moreover, these products were made mostly by small vegan businesses. But in 2019 the situation changed when the big players arrived on the market, reports Alexey Ivanov of Eating Better Russia

In Russian the name of this company means suburb, but they definitely don’t want to stay outside of the plant-based race in Russia! At the beginning of 2020 this company released several types of plant-based alternatives.

“When we first thought about producing vegan and vegetarian alternatives, the market was almost empty. And there were more and more people who didn’t eat meat for different reasons. The management of Okraina actively followed the trends in the Western market where development of the plant-based industry was faster, and they adopted their experience,” Okraina’s representative said.

“In almost every meat company there are people who do not eat meat products. It was these people who picked up the idea of creating a separate business – Vegafood – specializing in plant-based alternatives for vegans, vegetarians and fasting.”

Now the company is doing research and is developing a line of new products: minced meat, bacon, sausages, dumplings and cutlets.

In 2019 we already knew that big meat companies around the world were starting to produce their own plant-based products. But there were no such companies in Russia. That’s why we were so pleasantly surprised to find out that Naro-Fominsk meat company released their first plant-based products (sausages and burger patties) in Autumn 2019 under the brand NOT MEAT. In 2020 the company released more than 10 products (6 types of plant-based cheese among them!) which showed much bigger capacity of meat companies compared to those who started from scratch.

Kotletar meat company from a small Russian town called Kostroma has been producing only meat products since 1997. In 2018 the Kotletar representatives visited the meat conference in Austria where they tasted plant-based meat from several European producers. They were amazed that the taste was the same as meat and started experimenting in making plant-based products on their own.

As a result, they launched chicken and beef plant-based patties at the beginning of 2020 and the agreements on distribution in several supermarket chains followed. Kotletar is by no means the largest meat producer in Russia, but even at its current size it has the potential to produce up to 100 tonnes of plant-based products per month. The company is also working on the production of nuggets and dumplings — a traditional Russian meal. Kirill Aleksandrov, Kotletar’s head of development, confirmed that they are willing to relocate much more resources to the plant-based alternatives production in the coming years.

Another promising and unexpected piece of news of came recently from the Myasoet meat company; Nodar Uzarashvili, the co-founder of the company, announced plans to launch plant-based meat production and to build a special factory for this purpose.

The company collaborated with ITMO University from St-Petersburg and German research laboratory to become a competitor to Beyond Meat at the Russian market. The first of Myasoet’s plant-based meat was supposed to be served in the company’s meat restaurant in spring 2020, but due to the pandemic, the launch was postponed to this coming year.

From mayonnaise to plant-based meat

In autumn 2020, two new plant-based brands were launched on the Russian market. Both companies behind them, EFKO group and NMZK, are mostly focused on producing mayonnaise and oils (hence why their patties are so juicy).

Both of them started from the production of patties and mince and distribution in Moscow restaurants. After just three months later, it is already possible to buy WellDone (the brand of NMZK) in Lenta – one of the largest supermarket chains in Russia. Usually, it takes several years to start distribution of plant-based products in large supermarket chains for those vegan startups who started from scratch.

At the end of December EFKO announced the launch of their Hi!Burger in one of the largest fast-food chains, Teremok. It’s worth mentioning that Teremok stopped serving meals with Beyond Meat some months ago due to the increased price during the pandemic. The price of Hi!burger is around 1.5 times lower and the taste is good as well.

“The Food of the Future is coming to our home! Yes, it’s a big word, but it’s true. And the main thing is that this breakthrough was made by a Russian company. And the homemade cutlets “Hi!” are simply unbelievably delicious,” said Michael Goncharov, the founder of Teremok.

These words again remind us of the space race between US and Russia. This race which raised interest of the big producers to the Russian plant-based market and also helped to decrease prices is very beneficial for the availability of the plant-based alternatives.

Meanwhile the market share of plant-based alternatives at the Russian meat market is just about 1%, so we are looking forward to new big players entering the game.

“Even this year we can already see an increase of interest in alternative products. The needs of vegans and vegetarians became the focus of the producers and demand has increased dramatically. We have no doubt that in the near future the market will grow, and it can not but rejoice,” concludes Aleksandra Deledivka from Okraina.