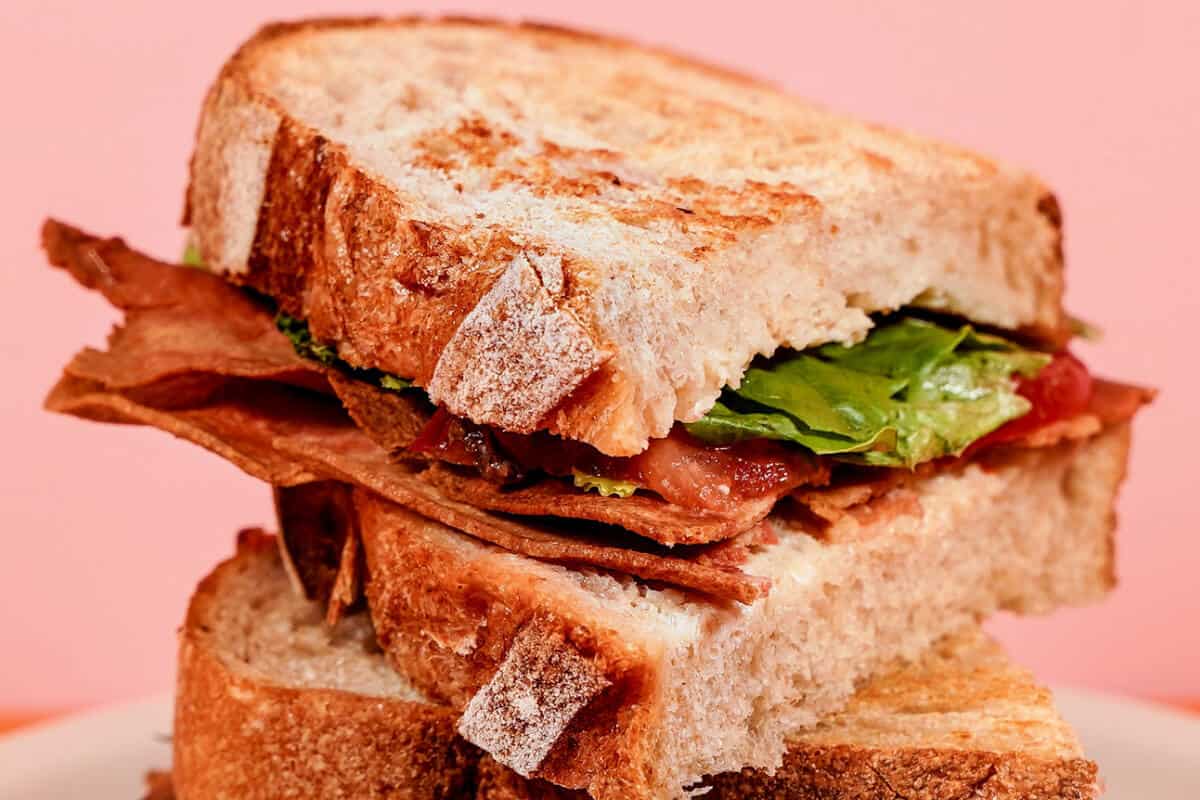 Twenty years ago, you would be lucky to walk into the supermarket and find soymilk on the shelf. If you spotted the bleak rectangle shelf-stable box it was a banner day. But as we are witnessing, VegTech has entered the market in such a big way that the end of animal-based products may well be in sight, reports Anna Keeve.

The same was true for veggie burgers: the underwhelming selection of bean or soy-based patties didn’t leave much to be desired, and no chance you were bringing those to a BBQ in an attempt to woo your meat-loving friends.

A lot has changed in the last few decades. Plant-based foods have reached an inflection point. There is growth in nearly every plant-based food category, and it’s estimated that 25 percent of the US population is opting for these vegan-friendly alternatives over their animal-based counterparts. One of the key reasons for the mass acceleration of plant-based products—especially plant-based proteins—is food technology.

This emerging sector of plant-based food technology is so significant and represents an industry of epidemic proportion, it exhorts its own industry category: enter “VegTech” (a term I coined earlier this year on the Plant Based Business Hour podcast and Facebook Live show). VegTech companies are food technology companies creating plant-based meat or dairy products. At their core, VegTech companies are hyper-focused on creating foods that are not substitutes or alternatives, but replacements for animal-based foods; a defining characteristic is their intent to make products that are nearly indistinguishable from animal-based natives.

As more companies enter the VegTech sector and attract mammoth investments, the plant-based food evolution—and revolution—is impending. VegTech companies are helping usher in a new era of plant-driven foods that appeal to the masses.

For the everyday shopper, technological food innovation means better tasting products, available more places—retail, food service, and even direct-to-consumer online—and at a price point that will rival, and will eventually be lower than, animal-based counterpart products. People, and the planet, have a lot to gain from this emerging sector, as we are just beginning to ascertain the potential of what will be one of the most influential industry sectors in modern history.

VegTech Companies at the Helm of Plant-Based Innovation

When you think about a VegTech company, you might imagine people in lab coats, hovering over a petri dish, growing food in a lab—it’s far less science-fiction looking, at least for now. Josh Nixon, Chief Technology Officer (CTO) at Prime Roots, a Bay-area startup focused on innovation in the plant-based protein space, explains that technology as it relates to food often has to do with ingredient innovation.

Having a goal of where you want to end up, a certain taste and texture, and taking a novel ingredient to reach that goal. Prime Roots for example is using an ingredient called Koji to create plant-based meat products that are on the market today. “Koji has not been used before to create texture and primary protein,” says Nixon. “We’ve taken this 8,000 year-old Japanese superfood and repurposed it, and are using it in a new way.” Nixon says that production looks more like a brewery and a kitchen than a science lab, and their innovation takes a form that is “a little more grounded to earth in solving problems this century.”

There’s a growing number of examples of food companies with technologists like Nixon at the helm. SIMULATE (formerly Nuggs) is another. Founded by tech entrepreneur Ben Pasternak, and a key hire Thierry Saint-Denis, the former senior director of research and innovation at Danone, is now Nuggs’ CTO. The company’s keystone product is “chicken” nuggets—you’ve likely seen their ads grace your Instagram feed. As the “Tesla of chicken,” the company says it utilizes “advanced soy protein technology that enables a hyper-realistic simulation of the texture and flavor of an animal-based nugget.” And currently, Pasternak and his company are working on 2.0 of their nuggets.

Bay area-based Eclipse ice cream prides itself on an ice cream that it says is indistinguishable from dairy ice cream. “While our ice cream was created in a kitchen, not a lab, we’ve discovered a blend of plants and a revolutionary process that allows us to unlock the magic of milk in a plant-based milk,” says Eclipse Foods CEO and Co-Founder Aylon Steinhart. “We are able to create indistinguishable dairy products from plants because we’ve discovered microscopic structures called micelles that allow dairy milk to turn from liquid (milk) to semi-solid (cream) to solid (cheese).” Recreating these micelles in their milk enables them to create a plant-based, non-GMO ice cream doppelgänger. Their ice creams are also equivalent to dairy products in terms of protein and calcium, but are allergen-free, and have almost no cholesterol or saturated fat found in conventional dairy.

Some of the established plant-based players in the VegTech space include JUST Inc., known best for their JUST Egg product. They manipulate mung beans to make a spitting image of an egg. And of course, there are household names like Beyond Meat (NASDAQ: BYND), one of the first modern-day VegTech companies, founded in 2009. They use technology to transform pea protein into meat-like burgers, meatballs and more. Their constant innovation is leading to better-tasting beef replacements, a better nutritional profile, and lower cost for the consumer.

Impossible Foods is another, and perhaps epitomizes a VegTech company. Their innovation comes in the form of a molecule called heme—a component of an oxygen-carrying molecule also present in blood—that gives meat a meat-like smell and look. Using a heme-containing protein naturally found in plants, Impossible Foods makes a burger that looks, tastes, and is even so close to the real thing, most people would never guess it’s all vegetables.

Based in Silicon Valley, on the surface Impossible Foods looks more like a tech company than a food company. And the company’s latest product, Impossible Sausage and Impossible Pork, debuted at the Consumer Electronics Show (CES) in January 2020. Yes, a technology show, not a food show. Impossible continues to pull in monster investments, raising nearly $1.3 billion since its founding in 2011.

Not all VegTech companies are created equal. And some question whether the hype of some technology matches up with reality. This is specifically true when it comes to cellular agriculture (often called “cell ag,” and when referring to proteins specifically, “cultured meat” or “clean meat” or “lab-grown meat”). While the aforementioned companies all have products on the market now, cell ag is in its infancy. This food technology, that may in fact be a little less grounded to earth, aims to make indistinguishable animal-like foods…without the animals.

While heralded as a technology that will revolutionize food and eliminate environmentally destructive animal agriculture, no cell ag-made products have reached the market yet. Many questions remain including high costs of development, regulatory and health concerns, plus people’s psychological acceptance. A study from the University of Sydney and Curtin University found that 72 percent of Generation Z (individuals born between 1995 and 2002) would not be interested in eating lab-grown meat, even if it means eliminating the need to slaughter animals. Despite this, big money is being poured into the space.

One cell ag company, Memphis Meat, which has attracted high-profile investors like Bill Gates, Richard Branson and meat giants Cargill and Tyson Foods, “cautioned the industry around releasing a product too soon, stressing the need to make it right, or risk tarnishing the image of the industry for years,” according to an interview with MarketWatch. The company has though demonstrated their proof of concept, making cultured chicken nuggets and beef meatballs, as well as duck tissue. BlueNalu in San Diego, Calif, has also demonstrated it can make fish meat from fish cells (obtained typically by swabbing skin tissue). The living cells are isolated and placed into a solution to proliferate. The end product is a fleshy tissue that is biologically identical to meat. The company demoed its bluefin tuna fish meat last year.

A question also remains as to whether or not cultured meat is vegan; it might depend on how cells are obtained. While no animals are slaughtered to make lab-grown meat, the cells needed to make the “meat” product still need to come from animals.

Fermentation, the Next Plant-Based Frontier

Fermentation is a lesser known, but highly important, pillar of plant-based food innovation and the VegTech sector. Fermentation uses microbial species to produce or transform a food product or ingredient. Heme is a fermented ingredient for example, and serves a key component of Impossible Foods’ “bleeding” burger. Fermentation can be harnessed to produce both enablers for plant-based and cultivated meat, eggs, and dairy, or as a primary protein source.

Fermentation technology is already delivering next-gen sustainable and efficiently produced plant-based meat and dairy products with more on the way. In 2019 fermentation companies raised 3.5 times more capital than cultivated meat companies worldwide and almost 60 percent as much as US plant-based meat, egg, and dairy companies according to Good Food Institute research.

The fermentation industry’s largest ever raise, was plant-based dairy company Perfect Day’s $300 million Series C. Perfect Day uses microflora (a microorganism such as bacteria, yeast, or in their case, fungi) to make proteins since microflora are particularly good at producing animal proteins. They use fermentation tanks to grow flora to eventually develop milk proteins that serve as the basis of their vegan dairy products like ice cream and cheese.

“We use fermentation to make the foods people love while delivering the same taste, texture, and nutrition as conventional dairy without the environmental, food safety, or welfare concerns,” says Perfect Day CEO and Co-founder Ryan Pandya. “But that’s just the start. By working with food and dairy companies to bring a new category of animal-free products to market, we’re building a next-generation supply chain to provide more nutritious, scalable options globally.”

Fermentation shows promise for the potential of greater scale, lower cost, improved efficiency, and enhanced sustainability. “The opportunity landscape for technology development is completely untapped in this area,” says Good Food Institute (GFI) Associate Director of Science and Technology Dr. Liz Specht. “Many alternative protein products of the future will harness the plethora of protein production methods now available, with the option of leveraging combinations of proteins derived from plants, animal cell culture, and microbial fermentation.”

Plant-Based Food at Scale: Vegtech Does These Three Things Better Than Anyone Else

What the current product-in-market VegTech companies have done well—and continue to improve on—is tackling the three factors critical to ushering in plant-based food adoption: availability, price and taste. As these companies scale, availability increases, price goes down and taste gets better.

“We think like a scientist, act like a technologist, but make food like a chef,” says Prime Roots Co-founder Joshua Nixon, reminding that while technology is critical, a chef-centric approach is important in putting forward desirable foods. “But technology is what makes the difference on taste and quality. When we create these delicious products, it becomes simpler to gain wide adoption and scale. If a sceptic has just one taste, they’ll have an epiphany. And if they haven’t had that epiphany, they haven’t tried a technology-enabled plant-based product.”

This piece was contributed by Anna Keeve, a freelance writer covering the plant-based sector.