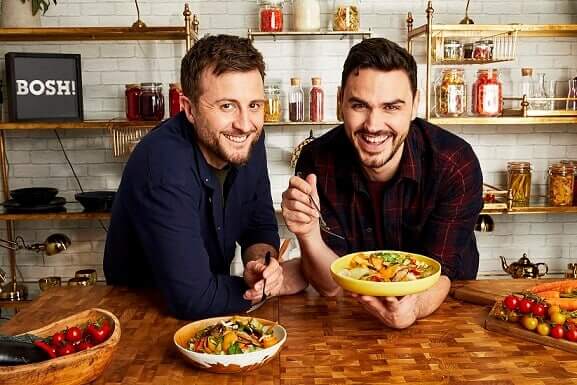 National UK television channel ITV will broadcast a new vegan cookery series – Living On The Veg – presented by vegan chefs Henry Firth and Ian Theasby, otherwise known as BOSH! The new series will be on screens from January, as veganism continues to take over the mainstream.

BOSH! first became well-known when they took the internet by storm with their viral plant-based recipe videos. The duo then had success with Sunday Times bestselling cookbooks. The BOSH! videos have received over 1.5 billion views online and Henry and Ian are the UK’s bestselling vegan authors.

The chefs now reveal that they will  bring their delicious food to the nation in a brand new series for ITV which will be broadcast every Sunday morning. The ten-part 60 minute series will see the chefs along with special guests demonstrating their favourite recipes and showing just how accessible and tasty vegan cooking can be.

Lara Akeju, Commissioning Editor, Daytime Entertainment, who commissioned the series with Leanne Clarke, Commissioning Assistant, said: “With so many of us resolving to eat less meat, it’s the perfect time to bring Ian and Henry’s unique take on vegan food to our viewers.”

Henry Firth and Ian Theasby said: “We are beyond excited to be sharing even more vegan recipes with the world and show people just how easy and delicious plant-based cooking can be. We’ll be sharing our top hacks and tips so that you can wow any dish. Whether you’re a fully fledged vegan or just want to cut down on meat and dairy, this series will have something for everyone.”