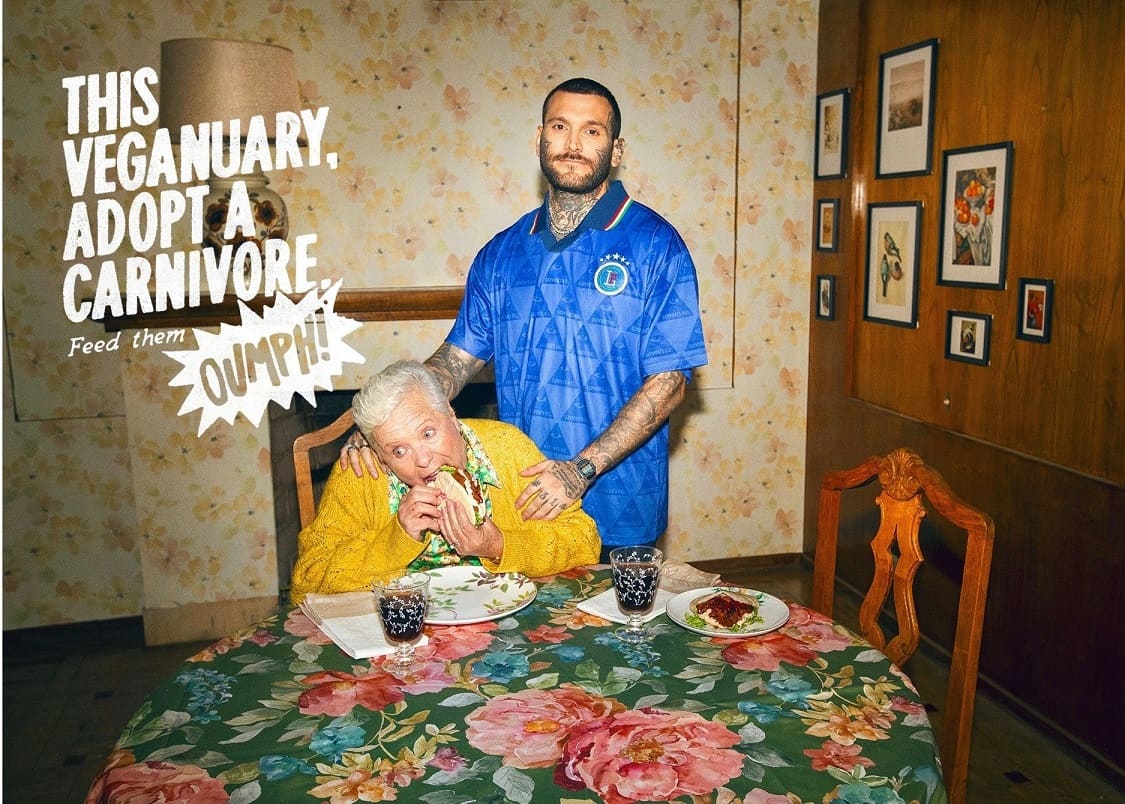 Oumph! is back for 2022 with another bold campaign called Adopt a Carnivore, challenging plant-based consumers to adopt a carnivore for Veganuary.

“The idea behind Adopt a Carnivore is that it’s more likely that people take on a challenge like Veganuary if they do it in collaboration with a friend”, says Henrik Åkerman, Global Brand Lead at Oumph! and Head of Marketing at LIVEKINDLY Collective Nordics.

Åkerman explains, “We would like to invite everyone who’s curious to try a plant-based diet to do so with enthusiasm and encouragement, rather than making demands of them or by pointing guilty fingers. We all know of that one curious colleague that stares into your lunchbox, that sister who’s curious but too lazy to try, or that grandma who wonders what this new plant-based food is all about. Why not adopt them. Or get adopted yourself.”

Toni Vernelli, International Head of Communications at Veganuary, comments: “We are excited that Oumph! is part of a growing movement, as supporters of the Veganuary 2022 campaign, to inspire people to move to a plant-based diet as a way of protecting the environment, preventing animal suffering and improving the health of millions of people.”

The Adopt a Carnivore campaign follows the huge success of Oumph!’s most recent Halloween Human Meat Plant-Based Burger Campaign, which was praised by marketing publication AdWeek as one of the top 5 plant-based campaigns of 2021.

Adopt a Carnivore features a range of advertising campaigns, as well as social media and high-profile celebrity collaborations, and will be running throughout Veganuary in several countries including Sweden, United Kingdom, Germany, Netherlands, South Africa and Australia.

In the UK, as part of its Adopt a Carnivore campaign,  Oumph! is collaborating on a social media campaign with Welsh endurance athlete, vegan chef and Veganuary ambassador Mathew Pritchard, AKA Dirty Vegan, who is adopting his carnivore friend, skateboarder and BBC Radio Presenter & DJ  James Threlfall MBE.

“I support Veganary because going vegan has had a really positive impact on my health”, says Mathew Pritchard. “I started researching veganism when I began training for endurance sports. So many athletes have gone vegan for so many different reasons. I also love animals. By adopting my friend James for Veganuary, I hope to inspire him to try a plant-based lifestyle for the month of January to see if he feels the benefits I’ve found as a result and see how easy it is to switch to a meat-free diet.”

“Many people make boring New Year’s resolutions which are attached to depriving oneself of pleasure, or demanding sacrifices, which makes them difficult to keep, and I think that’s a pity. I would like to encourage a January filled with exceptionally good food, which is shared with family and friends. Plant-based food can be amazing and Veganuary is the perfect time to share it with everyone you know.”

Find more information about ‘Adopt a Carnivore’ here and sign up for Veganuary.