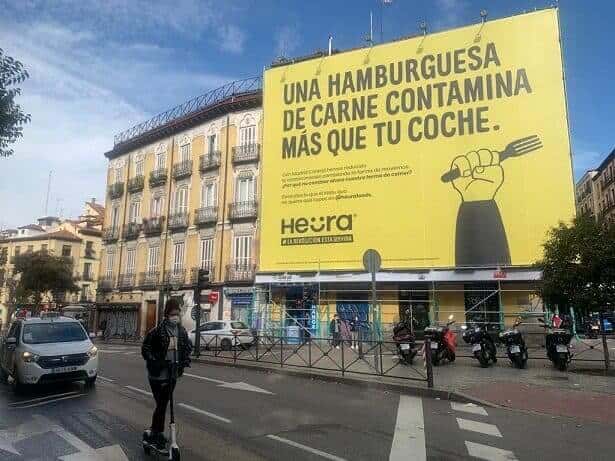 Spanish plant meat pioneer, Heura, continues to advertise in an interesting and educational way, rather than just trying to convince the public of how tasty their products are, as is often the case with traditional advertising. Heura is disseminating information about the benefits to the environment if consumers replace traditional meat with plant-based meat.

The ads, which can be seen across Spain and on social media, include messages showing facts, figures and facts about the benefits of switching to a plant-based diet.

Last year, the company put up a huge billboard in the centre of Madrid with the message: “A meat burger pollutes more than your car.” Although, unsurprisingly, the controversy forced the company to withdraw the advert in December, Heura seems unafraid of the livestock lobby.

Although some experts claim that it is difficult to compare emissions from the transport sector with those from the livestock sector – given the number of variables in the life cycle of both sectors – the claim that a beef burger pollutes more than a car is absolutely reasonable.

However, while the EU has expressed its commitment to the goals of the Paris Agreement to reduce emissions harmful to life on the planet, Greenpeace has also shown that 18-20% of the economic bloc’s annual budget goes to support the continent’s livestock industry, a clear example of political interests in the sector.

“I see Heura not as a plant-based meat company, but as a vehicle for social change,” Marc Coloma, CEO and co-founder of Heura, told vegconomist in December.

“We are going to change the way we think about food. In the past, the most important factor in food manufacturing was productivity, but now, instead of a consumerist approach, we will put consumer values at the centre,” he added.