Bill Gates, Ezra Klein and the GFI Call on Congress for Public Investment in Alt-Proteins in Face of Climate Crisis

As Ezra Klein calls on policymakers to make open-access research into plant-based and cell-cultured meat a key part of the American Jobs Plan and climate strategy, the GFI is strongly advocating for $2 billion in funds for open-access alt-protein science. The international nonprofit has also worked with Bill Gates‘ NGO Breakthrough Energy calling for public investment in alt-proteins as a key climate mitigation strategy.

US journalist and political analyst Klein, who previously co-founded Vox, has called for government action in his New York Times column: “At its heart, the American Jobs Plan is a climate bill. But there isn’t a dollar for alternative proteins, despite animal agriculture’s huge contributions to both climate and pandemic risk. That’s worse than a mistake. It’s a failure of policy design. Luckily, it’s easily fixed.”

The GFI is calling on the Biden-Harris transition policy recommendations team to invest $2 billion in funds for open-access alternative protein science, in order to tackle key white spaces to accelerate the growth of the sector. It has also written to Congress to appropriate $100m for plant-based and cultivated meat R&D, representing a coalition of 61 companies, nonprofits, and trade associations.

“Although private investment in alternative proteins is growing, open-access public research is crucial to accelerate growth. Public research will have a significantly broader impact on innovation and the economy by creating jobs and generating new opportunities to feed Americans and the world, rather than primarily benefiting specific companies,” explains the GFI in its letter to Congress.

The GFI has also worked with US Climate Advisers on a policy report outlining specific actions to leverage alt-protein’s potential to deliver 14 to 20 percent of the emissions mitigation needed by 2050. Central to each action is increased investment in open-access science and increased global collaboration. Breakthrough Energy – the net-zero emissions NGO set up by Bill Gates, Michael Bloomberg, Richard Branson, Jack Ma and others – has worked with the GFI on their federal policy priorities, putting increased federal investment in alt-proteins R&D at the top of the list, including plant proteins, cellular agriculture, and microbial fermentation. 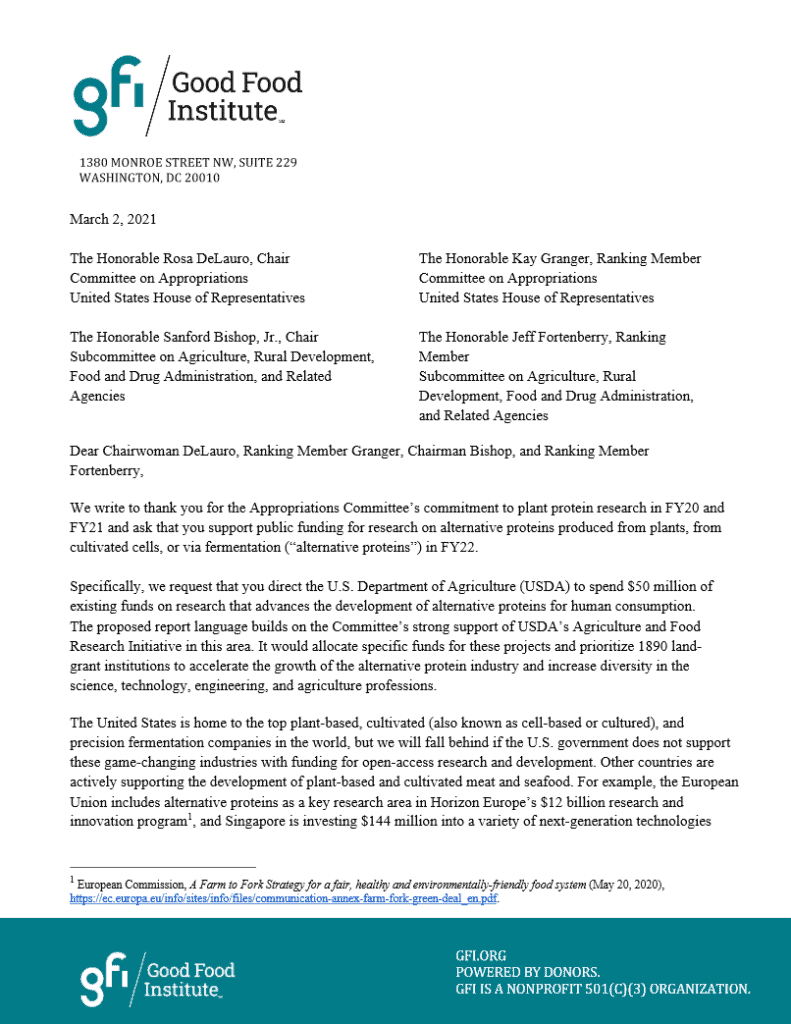 “It will be scientifically impossible for governments to meet their obligations under the Paris Climate Agreement to decarbonize the global economy unless the amount of meat produced via conventional animal agriculture significantly declines. With global livestock contributing an estimated 14.5 percent of all anthropogenic greenhouse gas emissions, our current food production methods are not efficient enough to meet the growing global demand for protein and reach zero emissions by 2050,” explained the GFI regarding its work with Breakthrough Energy.