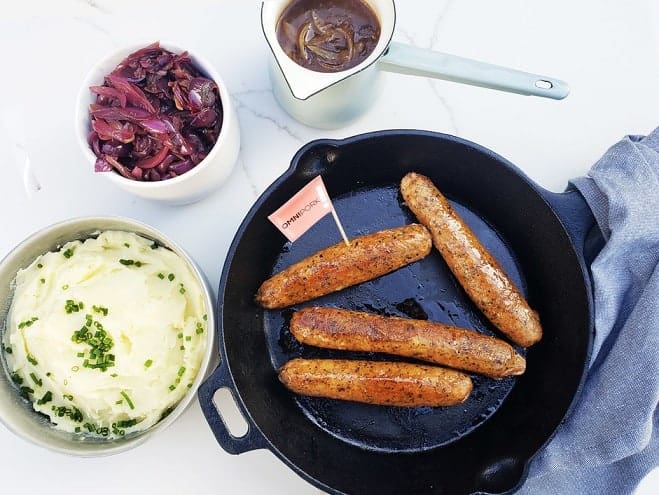 Plant-based pork phenomenon OmniPork has this week made its long-awaited UK  retail debut. OmniPork Mince will now be available at TheVeganKind – the UK’s biggest vegan online retailer – with OmniPork Strips to arrive in June, to be followed by Luncheon Meat AKA the famous vegan SPAM.

OmniPork was originally developed to cater to the growing demand for Asian plant-based cuisine by parent group Green Monday, which was this week ranked by FORTUNE China as number 8 on their China’s Top 20 Social Impact Startup List. Selected OmniPork products rolled out on a limited basis into a handful of UK restaurants as part of this year’s Veganuary, with this week’s VeganKind launch being the official retail launch.

The success of the vegan SPAM across Asia was “unprecedented” according to Founder David Yeung, even making it onto McDonald’s menus in the region. It enjoys great success across Asia, including in China, Thailand, Japan, as well as in Canada, where the firm’s R&D is based. Last year It reported weekly sales of one million OmniPork dumplings since launching, proving the popularity of the products that could take the UK market by storm.

Scotland-based plant-based online superstore TheVeganKind will first stock the OmniPork Mince, made with soy, pea, rice, and shiitake mushrooms, with 12 grams of protein and 3.8 grams of dietary fibre in every 100 grams. It also contains 0mg cholesterol and no GM ingredients, is antibiotic-free and hormone-free. The product will retail at £3.99 for 230g.

Scott McCulloch, Founder of TheVeganKind said: “When I first cooked OmniPork I could not believe how much it replicated pork. Having not consumed meat or dairy in now nearly 8 years I forgot pork even had a smell or a taste. As soon as this started cooking it all came flooding back. They have recreated it perfectly, and entirely from plant-based sources. Absolutely incredible job from David and the OmniPork team. This will definitely satisfy meat-eaters and vegans alike!”