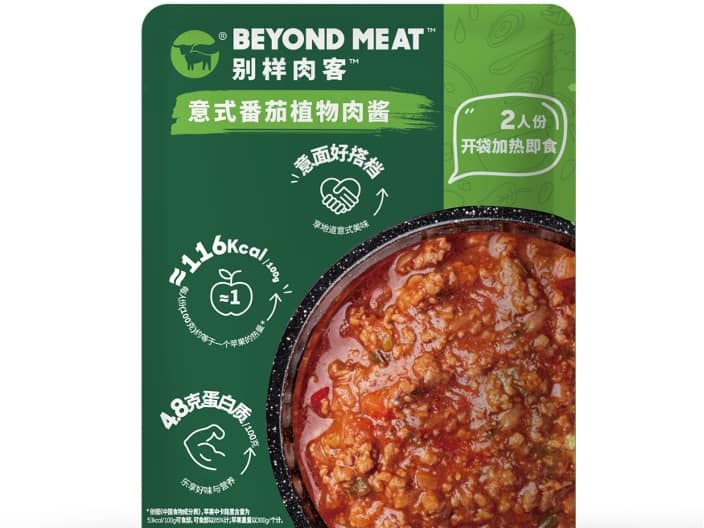 Plant-based meat leader Beyond Meat has announced the launch of its first vegan meat sauce collection. Created specifically for the Chinese market, the meat sauce range is launching with two flavors; Classic Bolognese and Savory Black Pepper, both using Beyond Pork.

Ideal for use in a range of dishes, the new plant-based meat sauces are aimed at China’s growing flexitarian market and towards providing a healthier option in the convenience food segment. With around 103 kcal per 100g, Beyond Meat claims each serving of the sauce offers a calorie level equivalent to that of an apple.

The US brand is continuing its efforts to become the dominant force in the Chinese market following the development of its Beyond Pork, the company’s first plant-based meat created specifically for the Chinese market, which Beyond claims has half the amount of fat compared to conventional pork. Pork is the most popular meat in China, with some research showing the country eats up to half of all the pork in the world.

NASDAQ-listed company Beyond Meat states it aims to make its sustainable plant-based options widely accessible in China, as well as convenient to prepare. Beyond Meat products are currently available at retailers in the country such as City Shop and Sam’s Club and on China’s three major e-commerce platforms. Beyond also recently announced a new partnership with Chinese convenience store Lawson.

“Launching Beyond Meat’s first-ever plant-based meat sauce product under our brand in China reflects our commitment to the market, where we have witnessed significant potential and opportunities in the plant-based protein category, as well as the rising trend of more local consumers incorporating plant-based food into their diet,” stated Jeremy Yeo, Beyond Meat’s Acting General Manager in China.