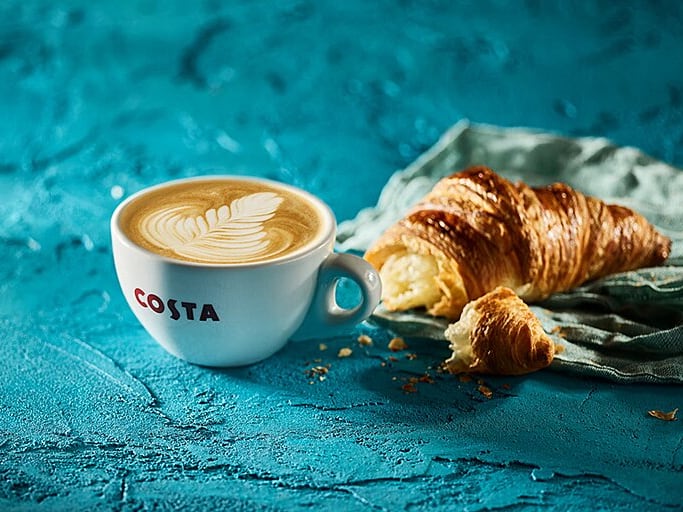 UK high street coffee chain Costa has added some impressive menu items including Vegan Macaroni Cheeze and Vegan BBQ Chick’n Panini, as well as various sweet treats. Meanwhile, Caffè Nero, the Italian style coffee house chain HQ’d in London and with locations in 11 countries, has collaborated with THIS to launch its Veganuary menu across all UK outlets.

The fastest-growing coffee shop chain in the UK, and a subsidiary of the Coca-Cola Company, Costa has been adding vegan options gradually over recent years, but the new additions represent a significant increase and investment. In 2021, the brand added the Vegan Bac’n Breakfast Bap nationwide with Irish brand Finnebrogue’s Naked Bacon Without The Oink!, a product which consistently sold out around the country.

Joining the sweet offerings is the new Chocolate & Pecan Slice made in partnership with popular vegan recipe channel BOSH! marking the second time Costa has partnered with BOSH!, following the addition of its Ultimate Chocolate Slice last year. The vegan Apple Crumble Flapjack and a vegan dark chocolate protein bar are also now part of the range.

Caffe Nero’s newest partnership with plant meat star THIS follows their Vegan Festive Feast Panini launched last November across 700 UK locations. The new offerings include an arrabbiata panini featuring THIS Isn’t Chicken with spinach and spicy tomato sauce, and a ciabatta featuring THIS Isn’t Pork Mini Sausages. According to the Mail, during a taste test in Covent Garden, London, 97% of consumers believed the sausage ciabatta contained real animal meat.

Marcus Denison-Smith, Marketing Director at Caffè Nero, said: “We have been transforming our food offer over recent years to elevate the food experience in our coffee shops and offer more variety with better quality ingredients for a range of evolving customer requirements.”