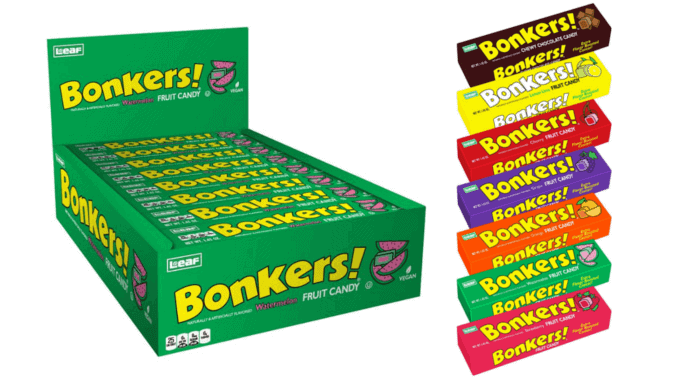 Bonkers, the classic chewy candy from the 80s, will soon be back on the market in vegan form. LEAF Brands announced this at the Sweets and Snacks Expo in Chicago, where the newly launched chewy candy was presented for the first time.

LEAF was founded in North America in 1920 as a family business, and has since then been selling sweets such as “Whoopers”, “Jolly Rancher” and “Rain Blo Bubblegum” – brands that have made the company famous worldwide. The chewy candy, called Bonkers, was discontinued after the company’s acquisition by Hershey Chocolate and Confectionary Corporation in the 1990s.

However, after consumers repeatedly called for a new version, the company gave in to high demand and will soon launch its vegan successor. The return of Bonkers has been planned for some time; the news first appeared on the company’s Facebook page as early as 2014. However, the product’s return was delayed due to the lack of a suitable formulation for the new version of Bonkers.

According to Ellia Kassoff – CEO of LEAF Brands – the recipe was ultimately developed with Bonkers fans. She says, “We have worked closely with our Bonkers fans to make sure we are on the right track. We are happy that the recipe is ready, so that we can finally make our Bonkers fans happy again.”