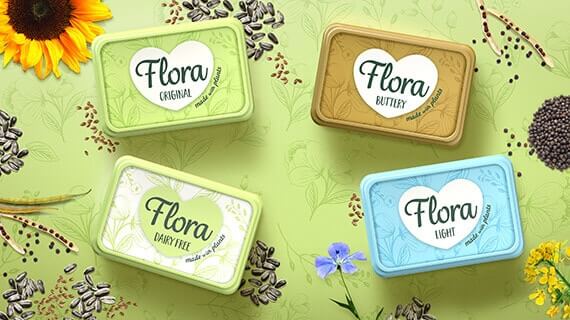 Well-known margarine brand Flora has changed the recipes of its spreads which are now 100% plant-based, Upfield has announced. Upfield purchased Flora from Unilever in December 2017, and are supported by vegan chef Alexis Gauthier of plant-based restaurant Gauthier Soho.

The reformulated Flora range – Flora Original, Flora Light, Flora Buttery, and Flora Dairy Free – are made without preservatives, artificial colours or flavours, and suitable for vegans, approved by the Vegan Society. The spreads are available in stores from 18 March, and will be supported by a TV campaign later this year.

Steven Hermiston, general manager at the brand’s owner, Upfield said: “Upfield’s UK & Ireland general manager, Steven Hermiston, commented: “Consumer diets are changing, and there is a great awareness around what people are eating and where that food comes from. With plant-based dishes also growing in popularity, our new range of Flora allows operators to cater to the evolving consumer demands.”

Alan Black is a vegan who works as head of foodservice marketing for Upfield. He commented in a press conference, “I’ve baked with the new Flora 100% plant-based spread, glazed vegetables and made pastry with it too. It’s a really versatile product, but most importantly it tastes great.”