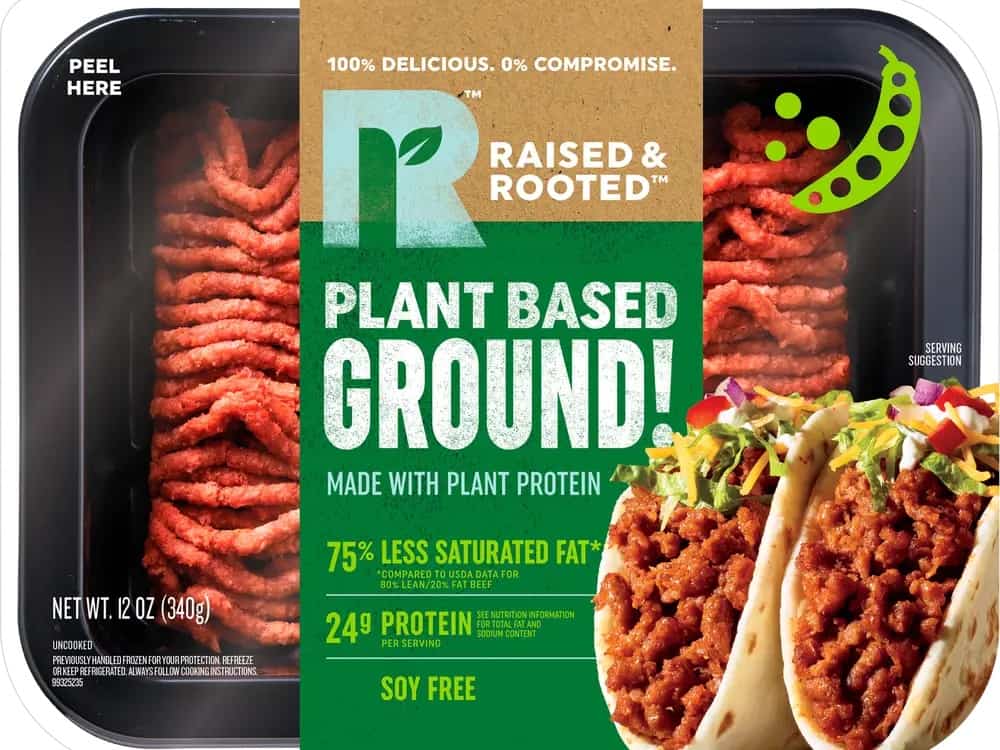 Raised & Rooted, the plant-based brand produced by Tyson Foods – the second biggest animal meat company in the world after Brazil’s JBS – is expanding its range with three new products. Tyson this week enters the market with new plant-based burger patties, vegan ground beef, and two types of sausage, meaning serious business – with a rollout into an incredible 10,000 US retail locations.

After the failure of its hybrid beef and pea protein burger, and its non-vegan “plant-based” chicken nuggets which contained eggs, as discontinued last year, Tyson is back with more offerings. The company is the world’s second-largest processor and marketer of chicken, beef, and pork, and annually is the largest US beef exporter. With such capital and infrastructure, it comes as no surprise to find the Raised & Rooted brand entering a number of locations as high as 10,000, as well as online, with plans to expand globally from the US into Europe.

With US sales of plant-based meat, dairy, and eggs outpacing sales of animal products for the third year running, Tyson Foods has made no secret of its plans to enter the plant-based meat sphere and compete directly with the likes of Beyond Meat – a company with which it has a rocky history after being an early investor then selling shares before Beyond’s famous IPO in 2019. In February, Beyond announced a three-year deal with McDonald’s, which is one of Tyson’s biggest customers as supplier of poultry meat.

“We haven’t really seen in the marketplace any brands owned by Hormel or Tyson get much traction,” Dennis Woodside, President of Impossible Foods told Bloomberg. He estimated Beyond and Impossible have over 80% of the core fresh plant-based ground beef category. “All the other players are falling by the wayside.”

Throughout its history, Tyson Foods has been marred by scandals regarding the environment and, naturally, animal cruelty. According to data the company submitted to the US Environmental Protection Agency’s Toxic Release Inventory, Tyson Foods was allegedly the second biggest polluter of America’s waterways from 2010 to 2014. While some commentators argue that big business entering the plant-based sector is good for the growth of both the market and the movement, others continue to warn of the dangers of greenwashing.

“Our products are plants made meatier, and deliver the same delicious flavors, in a better-for-you alternative,” said David Ervin, vice president of marketing, Raised & Rooted. “We are excited to provide people with satisfying alternative protein options perfect for any occasion.”