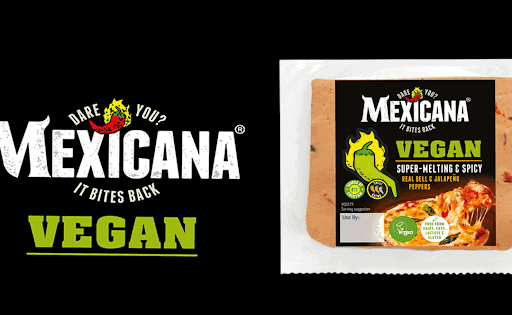 Speciality cheese company Norseland, the UK producer of Applewood cheese, has won a Quality Food Award in the Dairy-Free Vegan Cheese Blocks category. The company received the award for its Mexicana® Vegan block, a dairy-free version of its popular spicy Mexicana cheese.

Norseland experienced huge sales after launching Applewood Vegan in 2019, winning several awards, and its success inspired the company to veganise its Mexicana cheese too. The company has also launched a website, Flexi-Friday, with the aim of helping cheese-lovers eat a more flexitarian diet.

Mexicana Vegan is coconut-based, containing bell and jalapeño peppers and a fiery spice mix. It’s meltable, made in an allergen-free factory, and fortified with calcium and vitamin B12. The cheese launched over the summer at 300 Asda stores. Asda recently announced it will be debuting a dedicated plant-based aisle.

For Christmas, Norseland will be launching a vegan version of its Ilchester® Festive Cheese Selection. It will include Applewood Vegan and Mexicana Vegan, alongside dairy-free versions of its Ilchester Blue Cheese and Ilchester Mature Cheddar.

“We were thrilled with how successfully Mexicana Vegan performed in taste tests before it launched in Asda stores in July, and since its arrival in the stores, demand has been extremely strong,” said Lisa Harrison, Senior Brand Manager for Mexicana Vegan. “To win the prestigious Quality Food Award just a few months after its launch is just the icing on the cake for the team that has worked on creating Mexicana Vegan. We hope that it is the first of many!”