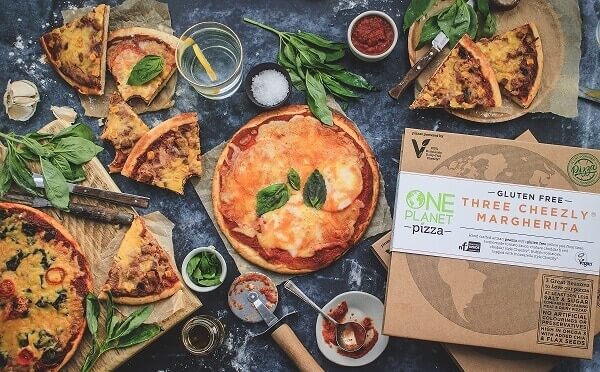 The brand new Three Cheezly Margherita features a new gluten-free base, with a classic homemade pizza sauce and buffalo tomatoes, topped with the famous OPP cheese which is known for having the stretchy and stringy qualities of a conventional pizza cheese. It is available now to purchase online at Ocado, The Vegan Kind Supermarket, and in independent health food shops around the UK, in time to help celebrate the biggest Veganuary campaign to date.

The father and son team says that the release is due to a huge demand from One Planet Pizza’s followers on social media, and outcries from a growing free-from plant-based audience. One Planet Pizza co-founder, Joe Hill, says: “Ever since we started making our very first pizzas over three years ago, we’ve been asked about producing a gluten-free version. We truly care about our customers and see them more as part of our team, that’s why we’ve always wanted to create a free-from pizza, to make sure that nobody has to miss out on some seriously cheezy goodness! We’ve been working behind the scenes for some time now (as you could tell from following our socials) and we’re incredibly excited for everyone to taste this new pizza, which is an absolute game changer – you won’t believe its gluten-free!”

Marketing assistant at One Planet Pizza, and fellow gluten-free vegan, Charlotte Willis, adds: “Many gluten-free pizza bases contain eggs to help bind the dough, making them unsuitable for vegans, or contain additives to improve the mouthfeel, yet fail to deliver on taste or texture. The new gluten-free One Planet Pizza base is totally unique! It is fluffy and crisp, completely vegan friendly, and doesn’t require a chemistry degree to decipher the all-natural ingredients.”