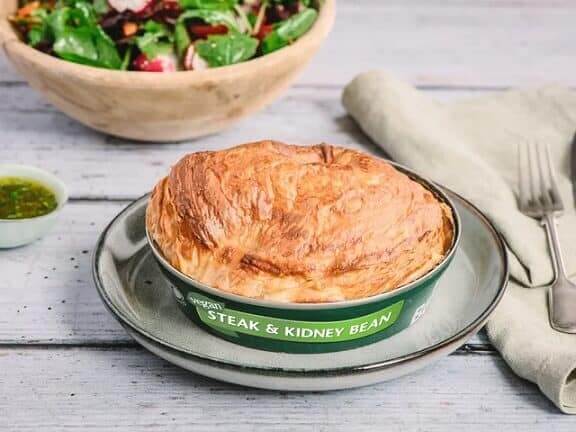 As a brand, Fray Bentos has been a household name in affordable processed food, namely tinned pies such as steak and kidney and steak and ale. This week at the PETA Vegan Food Awards, the vegan (tofu) steak and kidney pie was launched, as their first ever vegan offering in 140 years.

Fray Bentos, whose products are sold in UK, Europe, and Australia, has been a subsidiary of Baxters since 2011. Last year it launched a vegetarian balti pie, which must have seen enough success to warrant the company’s decision to work closely with animal rights charity PETA to devise a vegan dish, which was unveiled especially at the PETA awards.

Fray Bentos commented to INews  that the pie has a traditional flaky pastry crust and is filled with soya-based “steak” pieces, a savoury vegan gravy, and kidney beans.” The pie of course won the category of Best Pie at the awards, with PETA stating: “Here’s an exclusive: we’re delighted to reveal the Vegan Steak and Kidney Bean pie. PETA worked with the team at Fray Bentos to bring this nostalgic delight to the table. The limited edition pie will be available from the end of December to make your New Year’s dreams come true. Stock up for the apocalypse!”

Fray Bentos, Gregg’s, KFC, McDonalds, LEON, Chiquitos, Eat, Pret, Yo Sushi, Pizza Express, Subway, Frankie and Bennies, Harvester and Marston’s pubs, and even Ginster’s pasties – it’s difficult to think of a convenience food or fast food outlet in the UK which is actually not catching the wave and offering plantbased options. Can you think of one? Let us know in the comments.