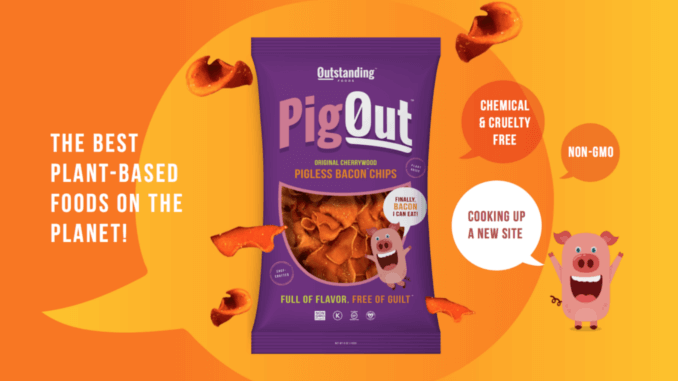 Bill Glaser states that the product’s mission is to make it easier for consumers to eat plant-based foods, as the chips have not just the positive health properties of vegan production, but also a delicious flavour. Bill Glaser adds that Dave Anderson – visionary and cook at Beyond Meat and Hampton Creek co-founder – has created a whole new category of snacks with the development of the chips.

The chips will initially be sold via the online store at OutstandingFoods.com and will subsequently be available at Thrive Market and physical stores. In the longer term, Outstanding Foods plans to launch a wide range of these types of products and is deliberately launching the bacon chips in the snack sector to gain a foothold in the mass market.

According to the manufacturer, countless respondents in surveys and tastings thought they were eating real bacon. The company explains that despite their healthier properties and ingredients (e.g. B vitamins, antioxidants and cholesterol-lowering lovastatin), Pig Out bacon chips are primarily tasty snacks.

Pig Out bacon chips will be available in the salty snacks aisle, like other common chip products, at a price of $4.99 per package. They will deliberately not be placed with alternative snacks (e.g. kale chips), in order to distance themselves from specially marketed products. According to Outstanding Foods, Millennials in particular will find the attractive and playful concept of vegan bacon chips appealing.

Outstanding Foods is to be marketed via top-class influencers in order to establish a degree of popularity for the bacon chips and the company. Distributors such as Whole Foods Markets will also be made aware of the product.

Pig Out already has a number of supporters and investors. The first wave of investors, including former professional skateboarder, actor, producer and TV personality Rob Dyrdek, actress, director and producer Emily Deschanel and actress and singer Daniella Monet, gave the company $1.5 million in start-up aid. Glaser and Anderson continue to gather investors to advance their plant-based vision and will announce their first new partners in the near future.