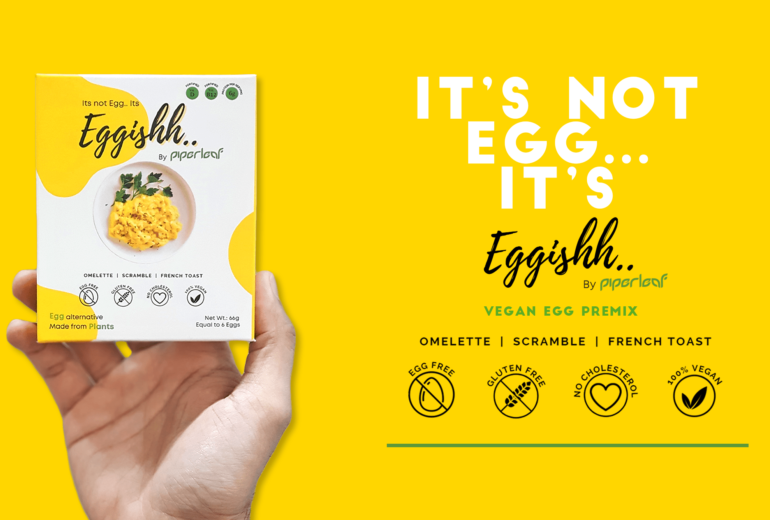 The average Indian eats 81 eggs per year, but only 4.5kg of meat. Despite this, India has far more companies working on alt-meat products than on plant-based eggs. Piperleaf’s founder, Anshul Agarwal, noticed this and decided something needed to change.

Agarwal assembled a team of experienced food scientists, who then spent over a year developing Eggishh. The resulting product is made from legumes and is free of gluten, soy, cholesterol, and artificial preservatives. It can be used to make a range of egg-based dishes, including omelette, scrambled eggs, and French toast.

Eggishh is already available via Piperleaf’s website, and will soon launch on other Indian e-commerce platforms.

“India’s domestic egg production is around 100 billion annually and we want to be the change that is needed today,” said Anshul Agarwal, founder of Piperleaf. “Piperleaf aims at catering to people with all kinds of diet such as non–vegetarians, lacto–ovo vegetarians, vegans etc. to help them move to a plant–based diet which provides them with food they are accustomed to and love. We believe Eggishh can be a part of your daily diet and will slowly allow you to eliminate eggs from your plate altogether.”

India has one of the highest numbers of vegetarians of any country worldwide, and meat is consumed in much smaller quantities than in the West. Indians generally don’t see meat as a superior source of protein, but the same can’t be said for other animal products — especially dairy.

Until recently, few companies had tried to address this, but plant-based alternatives are growing in popularity in the country. For example, Indian brand Bevry has launched oat milk specifically catered to the Indian market, with a thicker and creamier mouthfeel than many Western brands.

“Adults [in India] don’t want to simply drink a glass of milk. They use it in their teas and coffees and cakes; here is where vegan products in India need to improve,” he told Sentient Media.