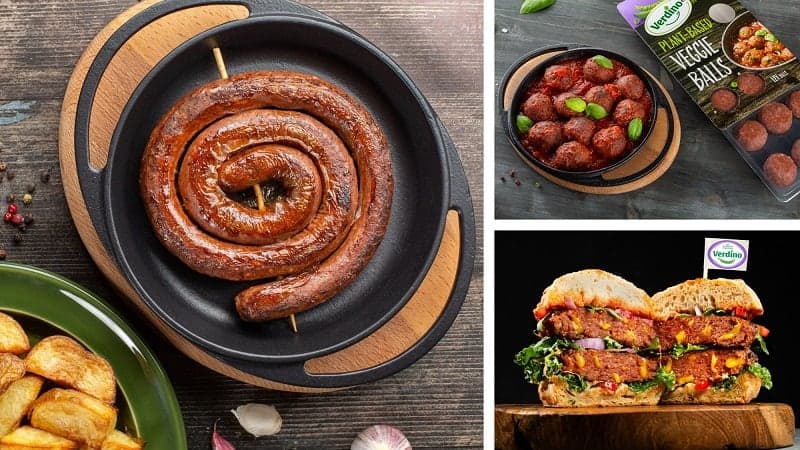 Romania’s Verdino Green Foods produces the country’s first meat alternative products using pea-protein. The company’s portfolio now reaches a total of 52 SKUs of vegan products with a new range of plant-based sausages, cheeseburgers, and veggie balls. The investment in the new products was encouraged also by the increase of exports in countries such as Spain, Netherlands, Switzerland, and Serbia.

As we reported last July, Verdino received 3 million euros from Salconserv Food, saying at the time that the investment was a “bet on the food of the future”. Since then the company has gone from strength to strength with its products available in Amsterdam, Rotterdam, Groningen, Madrid, Barcelona, Valencia, and Zurich. Partnerships are now also being signed with local retailers in the UK and Germany for rollouts this year.

The new products range includes six types of sausages: Bratwurst and Bratwurst with spinach, inspired by the German and Austrian cuisine, breakfast sausages – inspired by the British gastronomy, Merguez – with north-African spices but also extremely popular in France, Salsiccia sausages with Mediterranean spice and homemade traditional sausages from Romanian and Polish cuisine.

In addition to the sausages, the company launches ready-made veggie balls and cheeseburger filled with vegan cheddar. These join the existing lines of burgers, cevapcici, minced meat, sausages, salami, cheese based on coconut oil and other specialties like Mortadella with pistachio and bacon.

“Consumers started to be more aware of the positive effects of a flexitarian diet and have a more respectful attitude towards planet natural resources. Many retailers and restaurants understood that this is the food of the future and became more receptive to our plant-based products. Thus, we decided to expand our portfolio, offering consumers a variety of vegan products to choose from. Verdino products satisfy all taste requirements of consumers, have a balanced calory contents and are a real source of protein and fiber. We are present now in three areas of the store: fresh, ultra-fresh and frozen,” says Eberhart Raducanu, CEO Verdino Green Foods.