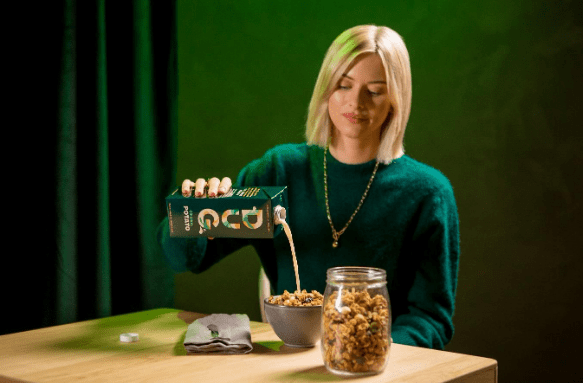 By now, most of us are familiar with the idea of putting oat or almond milk on our cereal. But Swedish brand DUG, created by Veg of Lund, has come up with a more unusual solution to the unsustainability of the dairy industry — potatoes.

Veg of Lund, which describes itself as a Swedish-based food innovator, developed its new potato-based milk alternative with Professor Eva Tornberg at Lund University. The products have recently launched onto the UK market.

But why potatoes? According to Veg of Lund, they’re even better for the environment than oats, using just half the amount of land. They also use a staggering 56 times less water than almonds. With their creaminess, neutral taste, and allergy-friendliness, perhaps the most surprising thing is that nobody seems to have thought of making milk from potatoes before.

Potatoes often get bad press, but an increasing number of companies are beginning to recognise their potential. Nordic meat company Scandi Standard is attempting to use them to make plant-based chicken, while Hydrosol is exploring the potential of potato protein in meat alternatives.

Veg of Lund’s innovation recently won DUG an award for Best Allergy Friendly Product at the World Food Innovation Awards 2021. The brand is already on the market in Sweden, and has just launched in the UK. It is available in three flavours — Original, Unsweetened, and Barista.

“DUG, our new, patented, award–winning, potato–based dairy alternative, ticks all the boxes: deliciously creamy, perfectly foamy, super–sustainable, and versatile, performing just as well in hot drinks as it does in cooking and in baking,” the company says.