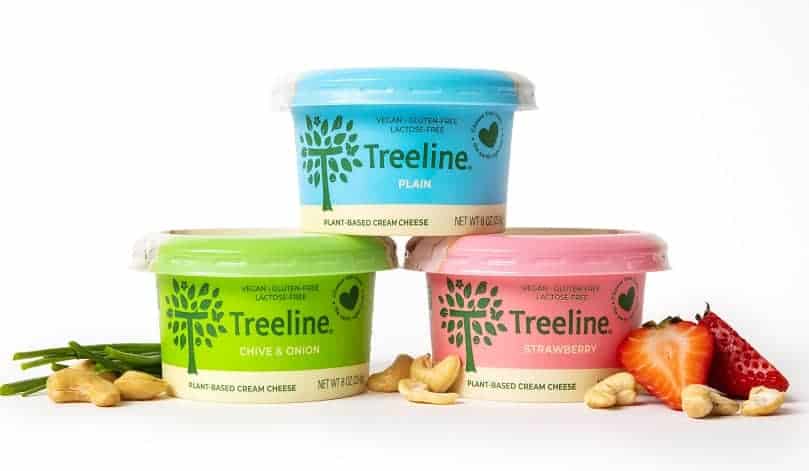 Treeline Cheese has launched a new line of vegan cream cheeses products, including a Strawberry cheese variety, to be sold in over 1000 grocery stores throughout the US. Treeline was founded in 2011 in New York’s Hudson Valley by Michael Schwarz, a former intellectual property lawyer who left his career when he learned of the horrors of animal agriculture.

Schwarz felt compelled to create cruelty-free alternatives to dairy cheese and began experimenting with fermenting cashews in his home kitchen. At first, his plant-based cheeses were sold in small independent retailers in the Hudson Valley and New York City, and Treeline has gone from strength to strength in the decade since.

The new product line includes Plain, Chive & Onion and Strawberry flavors and Treeline claims that the new cream cheeses are lower in saturated fat than most other plant-based competitors, with a minimal amount of ingredients and free from artificial preservatives. The brand ethically sources cashews from Brazil that are ground into a cream and then fermented to produce health and flavour benefits.

According to Treeline, “A recent study conducted by the Plant Based Foods Association showed that vegan cheese sales grew by 43% [in 2019]. Treeline Cheese is a plant-based cheese that’s worthy of any artisanal cheese platter and pairs well with good wine. Treeline can also hold its own as a substitute to dairy-based cheeses in any recipe.”

The cream cheeses are now sold in over 1000 grocery stores across the USA including Whole Foods, Sprouts, Stop & Shop, Shaws and Giant Foods, and have an MSRP of $5.49-$6.99.