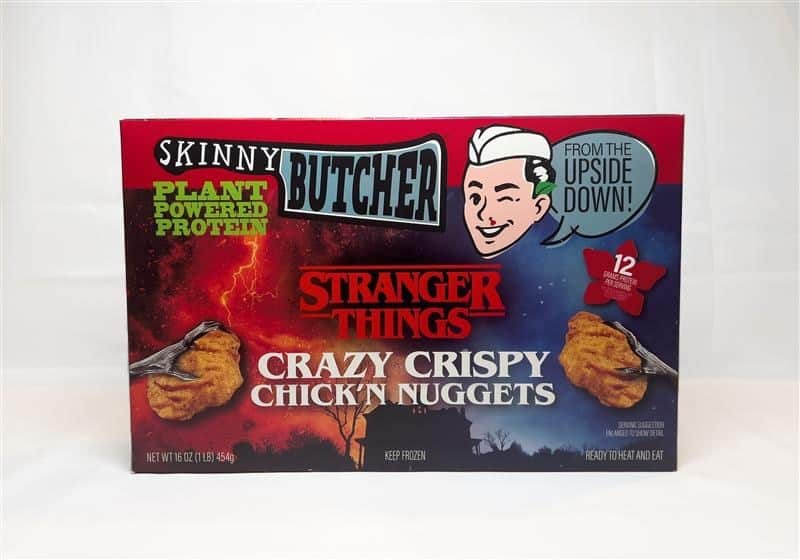 Plant-based poultry brand Skinny Butcher is reporting record retail sales following its initial debut in US Walmart stores in May. According to the company, its signature Crazy Crispy Chick’n Nuggets have become the top-selling plant-based item across all US Walmart stores, and is the third most popular frozen poultry substitute in the country, based on sales data provided by IRI.

Co-branded with Netflix’s immensely popular Stranger Things series, the Skinny Butcher nuggets quickly went viral on social media after launching this spring. In addition to Walmart, the product entered thousands of Safeway and regional Costco locations. At Walmart, IRI data from the most recent four-week period shows the nuggets had 3 times the velocity and made 2.3 times more in dollar sales than the second-best selling plant-based item.

Skinny Butcher credits the product’s success with its fun and lighthearted branding, which it says connects better with consumers through approachability. With special double breading, pea protein, and a proprietary spice blend, Skinny Butcher states its product is also one of the tastiest and crispiest plant-based chicken items on the market.

Developed by former Garden Fresh Gourmet partners and the LA-based Golden West Food Group, Skinny Butcher sells its innovative line of alternative poultry in-stores and via a virtual restaurant program. In March 2022, the brand raised $10M for its market launch.

“With Skinny Butcher, we sought to create meat-alternatives that still had the same delicious flavor and crunchy texture as traditional fried chicken, but were better for the planet,” says Skinny Butcher CEO, Dave Zilko. “ Our mission was to introduce a plant-based chicken line in which families did not have to make any sacrifice whatsoever with respect to animal protein comparables. In fact, feedback we’re receiving strongly suggests consumers prefer Skinny Butcher to animal protein items.”