The University of Copenhagen has found a method for making protein powder from broad (also known as fava) beans. Researchers tested different crops in relation to which had the greatest potential as a protein powder in foods and could be grown locally. Broad beans were found to surpass lentils, amaranth, buckwheat and quinoa.

The Danes are increasingly seeking plant-based protein and at the same time the soy bean continues to cause controversy amongst the new generation of vegans. According to the WWF, soy is the second biggest contributor to deforestation, after animal farming. Soy can be also highly genetically modified so that it can withstand herbicides like Roundup.

Using a method called ‘wet fractionation’, the researchers succeeded in concentrating the protein from broad beans and removing the substances that inhibit the digestion of the proteins. This ensures better absorption of the nutrition from the bean protein as we eat it.

Iben Lykke Petersen explained: “One thing is the content and nutritional quality of protein. Something else is the taste! But here too the broad bean can compete with soy and other alternative protein sources. When the broad bean is treated in the right way, the proteins retain the naturally bright colour, as well as a neutral taste and good texture. The producers in the market prefer to have a product that is tasteless, has a neutral colour and a solid texture.” 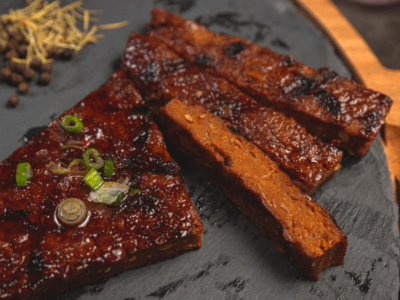