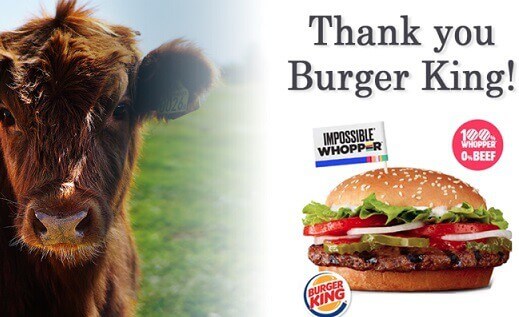 Following the news that Burger King has received a class-action lawsuit for committing “false and misleading business practices” with its plant-based burgers, vegconomist has been contacted by Canadian citizen who has launched a petition to do the exact opposite and invite the public to collectively applaud Burger King “on behalf of the undersigned vegans and vegetarians of the world.”

The petitioner, David Ray from Vancouver, Canada, says he has shared the petition with Impossible Foods, the Good Food Institute and the Washington Post. He said, “Like a lot of pragmatic vegetarians and vegans, I was delighted by the introduction of the Impossible Whopper and was disconcerted by the recent lawsuit by a fellow vegan.

“The burger has the potential to do so much good in so many different ways, and it has the support of many vegans and Vegetarians around the world. As a result, I started a petition to thank Burger King along these lines, and to let the company know there is enormous support among vegans and vegetarians for the new Impossible Whopper.”

The petition is as follows: 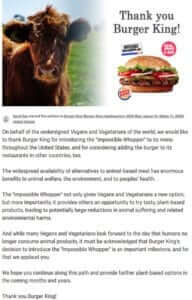 “On behalf of the undersigned vegans and vegetarians of the world, we would like to thank Burger King for introducing the Impossible Whopper to its menu throughout the United States, and for considering adding the burger to its restaurants in other countries, too.

“The widespread availability of alternatives to animal-based meat has enormous benefits to animal welfare, the environment, and to people’s health.

“The Impossible Whopper not only gives vegans and vegetarians a new option, but more importantly, it provides others an opportunity to try tasty, plant-based products, leading to potentially large reductions in animal suffering and related environmental harms.

“And while many vegans and vegetarians look forward to the day that humans no longer consume animal products, it must be acknowledged that Burger King’s decision to introduce the Impossible Whopper is an important milestone, and for that we applaud you.

“We hope you continue along this path and provide further plant-based options in the coming months and years.
Thank you Burger King”

While other vegans are still divided on the issue since the bun contains milk and the patty is cooked along with meat meaning it may contain animal juices or traces, several others maintain that this nonetheless represents a milestone and the killing of fewer animals.