How to Launch a Vegan Industrial Revolution

Could ‘shroomdogs’ and ‘veggie ribs’ be modern emblems of British innovation? These were two of the meat-free delights on offer at Sainsbury’s ‘vegan butchers’ – the UK’s first – which opened its doors to Londoners in late June. As one of the country’s largest supermarkets, Sainsbury’s recent animal-friendly zeal exhibits veganism’s gradual growth from hipsterish novelty into mainstream cuisine. That growth, combined with challenges it has yet to overcome, make it a perfect target for some activist policymaking.

Many vegans and vegetarians will have heard the complaint that abstaining from meat remains unaffordable for many families and households – with veganism in particular sometimes being labelled as ‘classist’. While it may sting one’s moral sensibilities, this largely misses the point. New habits and technologies have to pop up somewhere before they become widely adopted. If plant-based alternatives develop and familiarity with dietary alternatives spreads, these concerns should subside. Fresh economic thinking suggests how the state could help make that happen – through an industrial ‘mission’ for vegan innovation.

A paradigm for economic policymaking theorised and championed by Mariana Mazzucato and UCL’s Institute for Innovation and Public Purpose, industrial missions are enjoying a moment in the sun. The EU has drawn on this thinking for its R&D framework from 2020, Horizon Europe, while the Commission on Mission-Oriented Innovation and Industrial Strategy at UCL reviewed the UK government’s industrial strategy and the missions directed at achieving its ‘grand challenges’.

The concept crystallises many emerging features of the post-recession turn in economics. It recognises that ‘growth has not only a rate but also a direction’; claims an active role for the state in shaping markets and ‘tilting the playing field’; and understands that tackling huge societal tasks like climate change calls for an interconnected, systemic response. Missions themselves, once set, channel policymaking down the best path we can envisage.

Developing a mission for plant-based food would kick a burgeoning sector into overdrive. In what Waitrose calls ‘the era of the mindful consumer’, survey results frequently show more and more people claiming to live a meat-free lifestyle. While that includes vegetarians, the Vegan Society estimates just over one per cent of people in Great Britain abstain strictly from consuming meat or animal products. The number quadrupled over four years since 2014. Other surveys are more generous, depicting up to 7 per cent of Brits as active vegans. The gap, implying a wedge of respondents who stop short of practising veganism in full yet feel positively towards the term, only points to more room for growth. Industry research confirms the rate of growth and potential value as yet unrealised. In particular, the consultancy AT Kearney see cultured meat – made of animal cells cultivated in a lab – as the innovation with the greatest commercial potential.

Mazzucato’s work stresses that missions are supposed to be ambitious and spur a creative approach to radical change that cuts across sectors and types of organisation. The Apollo moon landing is cited as a prototypical mission, requiring a flurry of technological and scientific development – all coordinated across different types of organisation.

The wide variety of businesses and associations with a stake in the vegan industry should not be underestimated. A willing UK government could easily adopt a mission, say, to raise the proportion of British food accounted for by cultured and plant-based meat alternatives. The most costly innovations are clustered at the lab-grown end, making the most attractive target for investment in research and development. For plant-based meat replacements – already relatively well-established – public bodies could play a coordinating role to scale the existing range, by overcoming barriers from transportation to industry standards. Incentives for retailers to switch away from animal products would complete the value chain.

The economic incentives are clear and extend to trade as well as simply growing markets domestically. Brexit-related fragility has exacerbated the threat posed by Britain’s current account deficit. The EU accounts for over 90 per cent of British meat imports, and 70 per cent of exports in the case of pork. Vegan alternatives could alleviate this dependency. While veganism is growing in many countries, the UK is certainly an epicentre of the dietary revolution: more vegan products were launched here than in any other country in 2018. 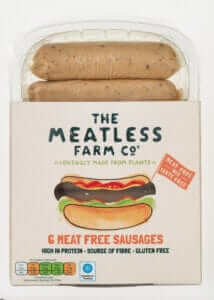 However, the main benefits of the vegan rise are environmental. In its report on achieving net-zero greenhouse gas emissions by 2050 (as UK legislation now requires), the Committee on Climate Change noted that ‘diet change [and] major land use changes on the freed-up land… are both needed for a net-zero target.’ An important mechanism for decarbonisation is to increase forest cover (deforestation of land is a major reason why beef and dairy production is so heavily polluting), for which land reclaimed from animal farming is the ideal candidate. If we aim instead for a stringent 2030 target for net-zero (or, as Extinction Rebellion advocate, 2025), then ditching meat and dairy is an urgent priority.

Whether under the Conservative government’s industrial strategy and its ‘clean growth grand challenge’, or Labour’s more wide-reaching plans for a ‘green industrial revolution’, addressing the future of agriculture will be crucial to the sustainable transition. A thoughtful commission on the subject could even examine links with sustainable fashion products – which enjoy broad public support – ensuring moves towards vegan fashion, such as replacing leather, are also environmentally sustainable. The point of mission-oriented policy is to aim big, and capitalise on connections between diverse actors that the market might not see.

At first blush, a vegan industrial mission might not seem like a public-relations winner. Yet research into how best to market plant-based alternatives is already developing. Only the most cynical meat-lover could paint achieving mass dietary change in the 21st century as a more optimistic mission than putting a human being on the moon in the 20th.

This article was first published in Open Democracy on 8th July.