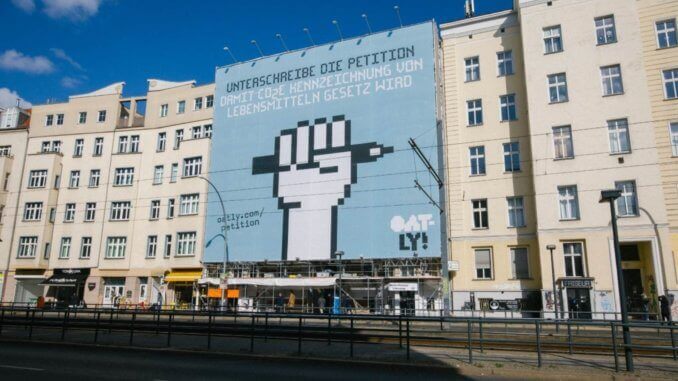 Swedish oat drink manufacturer Oatly has submitted a petition to the Petitions Committee of Germany demanding that all food sold in the German food retail trade be labelled with the greenhouse gases (CO2e) emitted by their production.

Now it is a matter of collecting 50,000 signatures within 28 days so that the topic can get the necessary political space. Oatly has dedicated a large-scale campaign to this project. Oatly is setting a good example by voluntarily marking its own climate footprint on various products.

Consumers have a right to know which foods are climate-friendly
According to the press release, the food industry causes at least 24 percent of all global greenhouse gas emissions. Consequently, the choice of our food has a crucial impact on the climate. But how can we eat more sustainably if we find out almost nothing about the climate balance of food on the supermarket shelf?

Consumers have a right to information about the products they consume. However, they can only make an informed, climate-friendly purchase decision if they are authorised to evaluate and compare the climate effects of different foods – all manufacturers must participate in this process. However, less than half of Germans believe that the food industry will voluntarily disclose its carbon footprint. Almost two-thirds of Germans therefore want the German government to oblige food manufacturers to disclose their climate footprint3. Oatly has now complied with this request.

The petition: Sign so that the climate footprint on food becomes law
“In the name of consumer protection, we call on the Bundestag to make the CO2e (CO2 and equivalent greenhouse gases) emitted by production mandatory on all food sold in Germany.” With these words the oat drink manufacturer addresses itself to the petition committee of the Bundestag. On 15 October, the petition was published on the Petitions Committee’s website. Up to 12 November supporters have now time by their signature of the demand more weight to give. If at least 50,000 signatures can be collected, the issue must be publicly debated and will ultimately, ideally, result in a corresponding law.

“It is impossible to make sustainable decisions without access to information about what is sustainable. A law to label food with the climate footprint could have a big impact on the food industry,” explains Tobias Goj, Managing Director DACH at Oatly Germany. The company wants to empower consumers to assess the climate costs of food while motivating food manufacturers to reduce the climate footprint of their products.

“Oatly stands for sustainability and is constantly trying to improve its own climate footprint. Recently, Oatly voluntarily began to print the climate footprint of its products on packaging. CarbonCloud, an independent scientific institute, determines for Oatly all greenhouse gas emissions in carbon dioxide equivalents throughout the production lifecycle – from harvest to supermarket and individually for each product. “We are aware that implementing CO2 labelling of food products across the board will require some initial effort, but we also know that it is feasible because we have established the process ourselves in our company,” explains Tobias Goj. Oatly’s goal is to achieve the quorum of 50,000 signatures so that the issue can be debated in public and so that it becomes clear what a great lever Germany can use this consumer information to help the climate.

In order to collect the necessary signatures, Oatly dedicates an entire campaign to the petition. Instead of depicting their products, they show a revolutionary hand with a pencil in it. Under the motto “Sign the petition so that CO2 labelling of food becomes law” the campaign leads to the created website of the petition: https://www.oatly.com/de/petition