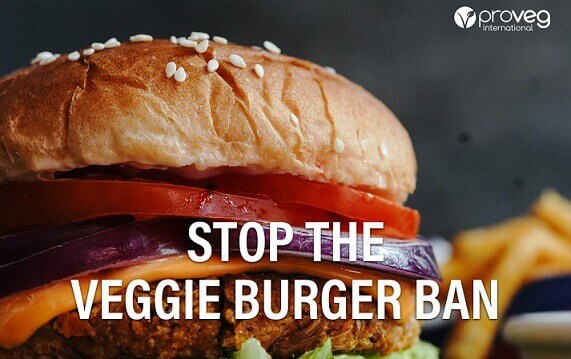 Lobbying is taking place at this moment for the ruling that would potentially ban the use of words such as ‘burger’ and ‘sausage’ for plant-based products, which would affect thousands of independent brands, forcing them to rebrand and relabel, potentially putting smaller companies out of business. Here’s the update and how you can help.

As of this morning, the situation has become even more convoluted, with the EPP splitting the voting on the amendment in a way that could mean that it passed “through the back door”.
MEPs are voting on different amendments –275 and 281. Amendment 281, proposed by the GUE-NGL and GREENS group, contains the veggie burger ban reserving meat-related terminology to animal products, however it includes clear and reasonable conditions under which plant-based products can still use them.
The EPP however introduced a split vote requiring parliament to vote on both separately.
The first part contains the ban, the second part the conditions. For any MEPs against the ban, they must now vote in favour of both parts. In this new situation, such MEPs would likely agree with the “clear and reasonable conditions” in AM 281 and thus they must vote for both the ban and the amendment, which risks their vote being counted in favour of the ban itself.
“The EPP proposed to separately vote to cross out the part “unless the names are qualified by terms that clearly indicate that the food in question does not contain edible parts of animals,”  according to the Politico newsletter.
“This split vote introduces even more confusion into what is an already confusing voting list,” says Elena Walden from the GFI.  “There’s now a real possibility that the ban could be adopted by mistake.”

“This is a cynical attempt of a protectionist meat industry to hinder the development and marketing of plant-based proteins in the EU. Their claims that the use of names, such as burgers and sausages, for meat substitutes are confusing are quite preposterous and disproportionate. It is an insult to consumers’ intelligence to suggest that they cannot tell the difference between burgers labelled as vegetarian, vegan or plant-based and meat from dead animals,” says Jo Swabe of Humane Society International.

“It is vital that we transition to more sustainable diets. Even the European Commission acknowledged the need to shift to a more plant-based diet in its recently adopted Farm to Fork Strategy. It is wholly unacceptable – and undermining to this Strategy and EU climate policy – to create unnecessary barriers for the growth for a burgeoning sector of the food industry, which has developed plant-based products to cater for the nutritional needs of a growing number of consumers seeking to reduce or eliminate animal products from their diets.”

How you can help

Readers can help today by re-tweeting, sharing and raising awareness so that MEP’s are aware of the loophole. Readers can also contact their MEPs to ask them to vote against this.

Renew Group (liberals) and Socialists are divided on the matter, let’s inform them about why this is crucial to European businesses.