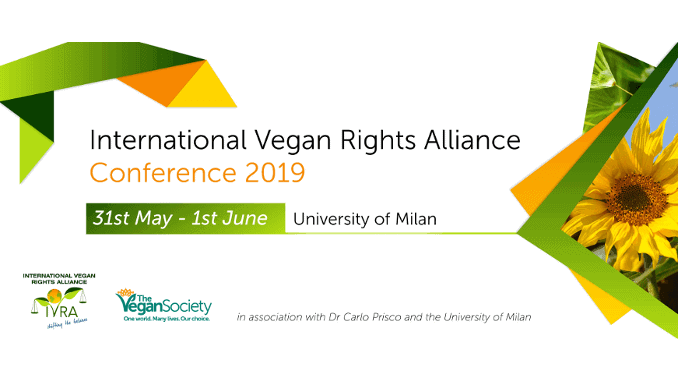 The European Parliament’s proposal to prohibit the use of labels such as ‘burger’ and ‘sausage’ from being able to be used to describe vegetarian and vegan products is one of the issues which will be discussed by legal experts at a pioneering vegan rights conference in Italy. The proposals, if passed, would mean that products such as veggie burgers could instead be named ‘discs’ and sausages ‘tubes’.

In light of these issues and similar matters, vegan lawyers and legal experts from around the world will gather at an annual legal conference to discuss how to influence the law for the benefit of animals and the planet. The event is organised by the International Vegan Rights Alliance (IVRA) and The Vegan Society, with the former officially merging to become the Society’s International Rights Network today, 31st May.

The theme of this year’s IVRA Conference – which is held at the University of Milan, Italy from 31 May to 1 June – is how vegan rights can help bring about a society that respects rather than exploits other animals. Dr Jeanette Rowley, founder of the IVRA, will talk in her opening speech about using the law within the vegan movement and criticise the recent EU proposals to ban certain denominations for vegan products.

Dr Rowley said: “Veganism in law disrupts the idea of exclusive protective rights only for humans. It emphasises our natural capacity to be responsible, dutiful and compassionate in response to vulnerability, injustice, oppression and suffering of animals. Promoting veganism in law will help bring about the paradigm shift we need to ensure that animals receive the protection they need and deserve.”

Dr Rowley also runs The Vegan Society’s rights service which has assisted with cases like helping school children, hospital patients and prisoners access vegan food; securing permissions for students to use vegan-friendly materials in their assessments; and getting workers access to vegan-friendly uniforms. It is the only such legal service currently being run, which vegans can access for free by emailing [email protected]

Louise Davies, Head of Campaigns, Policy and Research at The Vegan Society, said: “We are delighted to be taking on the important work of the IVRA. “We hope to work with all of the new International Rights Network to lead in advocating for vulnerable vegans and by extension protecting and furthering the rights of animals.”

The attendees will hear from vegan experts travelling from England, Scotland, Ireland, the US, Canada, Italy, Portugal, Germany and France, and sharing their experiences with lobbying various governments and getting involved in legal cases relating to veganism. Conference speakers also include Go Vegan World’s Sandra Higgins whose ‘milk is inhumane’ poster campaign was approved by the Advertising Standards Authority and The Vegan Society’s Mark Banahan talking about their ground-breaking Catering for Everyone campaign for vegan options on public sector menus.