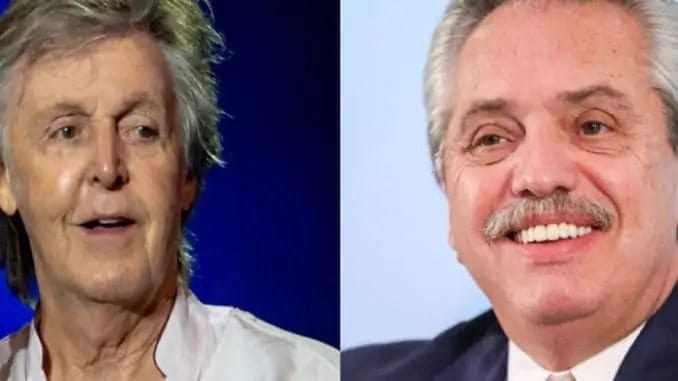 The President of Argentina, Alberto Fernandez, received a letter from former Beatle Paul McCartney, focusing on the international Meatless Mondays campaign, and the effects of meat on the environment. The president responded that he would agree to stop eating meat if Paul was brought to him to sing the song Blackbird in person.

In the letter, McCartney elaborated to the president on the harmful effects of meat on the planet, its role in climate change, deforestation and the link between animal exploitation and the spread of pandemics. This great gesture by Paul McCartney was carried out thanks to an initiative of the Argentine Vegan Union (UVA).

It all started with the UVA’s campaign to reject the installation of mega pork factories in Argentina to supply China. With half a million signatures, Liz Solari and Manuel Marti, leaders of the UVA and representing hundreds of NGOs, delivered the signatures to the head of state of Argentina, Alberto Fernandez.

According to the UVA, at the meeting they discussed the promotion of policies to encourage plant-based diets and boost the vegan food industry. This led to the emergence of campaigns such as Meatless Mondays, which is spearheaded by McCartney.

Manuel Martí, director of the Unión Vegana Argentina, told vegconomist en español that the president was interested in the issues mentioned. The president said that if UVA brought Paul to Argentina and he sang the song Blackbird to him, he would stop eating meat. UVA then contacted McCartney and the Beatles icon sent the letter to the Argentine leader.

By the end of 2020 the Argentine Vegan Union estimated, through the company KANTAR – INSIGHTS DIVISION, that 12% of the 40 million inhabitants of the South American country were vegans or vegetarians. With companies such as Vegan Nature, a brand of Nuestra Casa Vegana, investing USD $250,000 in a new plant on the outskirts of Buenos Aires last year, this sector has great potential in the country, where GDP growth is forecast at 4.89% this year.