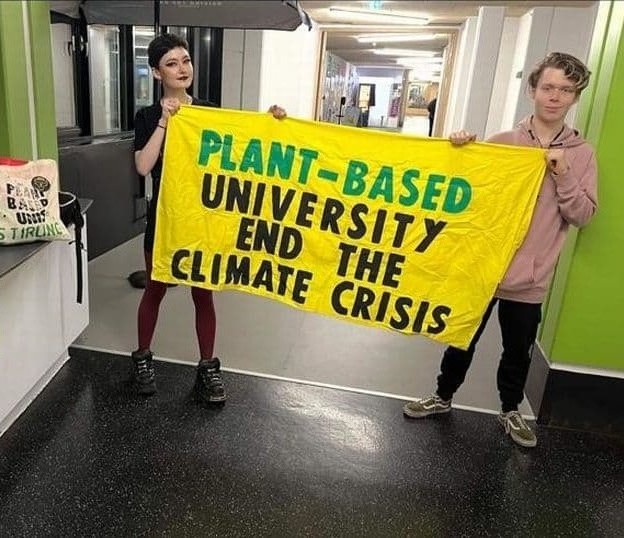 Students at Scotland’s Stirling University have voted to make all the meals offered at their Students’ Union (SU) plant-based by 2025.

The vote was inspired by the Plant Based Universities campaign, which calls for higher education institutes to remove animal products from their menus to improve sustainability. The campaign is supported by Animal Rebellion, an Extinction Rebellion offshoot with a focus on ending animal agriculture.

By the next academic year, 50% of options at Stirling’s three SU food outlets will be plant-based, with this figure rising to 100% by 2025. According to the SU website, moving towards plant-based diets is a “necessary step” in improving the sustainability of the food system. University food outlets outside the SU will not be affected.

While Stirling is the first British university to vote for a fully plant-based SU, some German universities have already passed similar motions. Meanwhile, catering giant Sodexo is working to reduce its carbon footprint in the US by making 42% of university meals plant-based; the company recently replaced a cheesesteak truck with a plant-forward outlet at Virginia’s Liberty University.

The vote at Stirling University has attracted anger from rural organisation The Countryside Alliance, which believes the decision will have a negative impact on farmers.

“Obviously this is an attack on freedom of choice imposed by a tiny number of students on the wider student body, but it is also illogical,” said spokesperson Mo Metcalf-Fisher. “Stirling’s students’ union would be much better off sourcing sustainable local meat and dairy produce from Scottish farmers instead.”

“Not only will the decision to ban animal products reduce the university’s overall carbon footprint, but it will make vegan food more accessible to a new cohort of people,” she said. “This is a hugely positive choice, and I would like to send my congratulations to these students who are standing up for what is right. They are saving the lives of animals as well as making better choices for their health.”