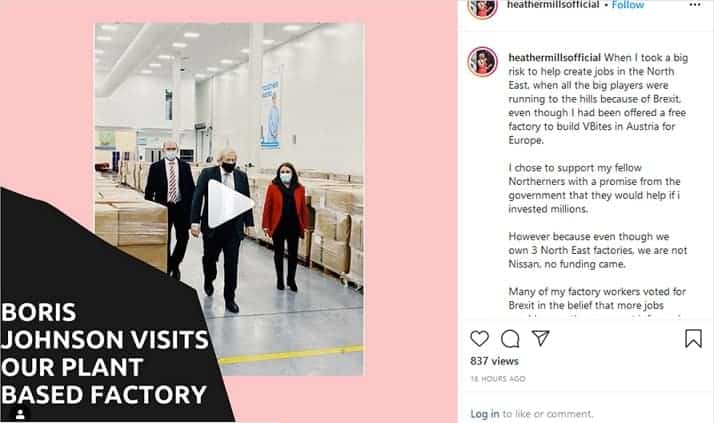 UK Prime Minister Boris Johnson has paid a visit to the VBites factory in North East England, one of Europe’s largest plant-based factories. The politician met with founder and owner Heather Mills at the facility, much to the surprise of the vegan entrepreneur and activist.

Mr Johnson has a chequered history with veganism, after stating going vegan was “a crime against cheese lovers”, failing to recognise the multi-billion dollar plant-based cheese industry. A recent petition from a group of UK healthcare professionals called for Johnson to go vegan for public health and environmental reasons, so it is interesting to note the quick succession of his meeting with Heather Mills.

Based in Northumberland in her native Northeast of England, Mills originally bought the site in 2019 as part of her plan to set up a plant-based Silicone Valley of vegan food production and development. The opening brought additional employment to the region when many manufacturers were moving abroad due to uncertainty over Brexit.

“I chose to support my fellow Northerners with a promise from the government that they would help if I invested millions,” said Mills via an Instagram post. Yet no funding came despite the restoration of hundreds of jobs in the region and claims of promises from the government.

“Many of my factory workers voted for Brexit in the belief that more jobs would come, they were not informed that many factories would close down”, she continued.

However, during the Covid-19 crisis the factory had no choice but to furlough its workers, with Mills once again called on to defend her business, arguing that she had ‘put millions into the plant’ with no assistance from banking institutions or governmental support. For the last 6 months, the NHS has moved into part of the site in order to manufacture PPE during the pandemic.

Mills is a prolific investor in vegan companies, with brands such as Vegan Fine Foods and LoveSeitan in her portfolio and VBites going from strength to strength after moving into the Middle Eastern market. She is now aiding local farmers to grow oats instead of dairy farming to provide local procurement and develop her companies’ oat milk and cheese products.

“When Covid-19 hit, we then offered the NHS a lifeline to support them with space so they could manufacture much needed PPE. So the last visitor I expected to visit my factory was Boris Johnson,” said Mills in her Instagram post.